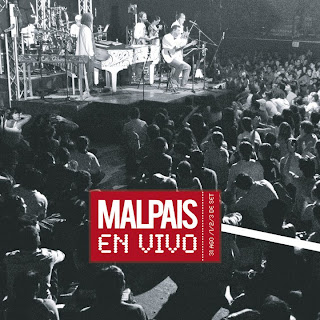 Malpais is Alive and Well

It is a simple contradiction. In Spanish, Malpais means, literally, “bad country” and is a term that is meant to represent a desolate, destitute place. As they say in Costa Rica, “Malpais is where the road ends”. The irony is that this word was chosen as a name for a band that continually creates melodic, fluent music. For their third CD, “Malpais en Vivo,” the band went for the more conventional, obvious title. The disc presents a compilation of live recordings taken from their September concerts last year at Antigua Adiana hall in San Jose. In all, ten of the band’s more popular songs are represented, from their first two studio albums, “Malpais Uno” and “Historias de Nadie”. The new disc also includes four new entries, “Bazar de Urias”, “Rosa de Un Dia”, “Bolero 10” and “Contramarea”.

The crowd response on the recording is indicative of the respect and popularity the band has garnered in its three year existence. The audience is enthusiastic in its responses throughout the shows, showing recognition for the “old treasures”, singing along unabashedly and very attentive for the new songs.  With more than sixty-five minutes of music on this disc, Malpais demonstrates their ability to stretch out their compositions and allow more room for instrumental solos that emphasize and highlight the musical versatility of the respective band members. Ivan Rodriguez certainly shows his talent on violin and mandolin on songs like “Como un Pajaro”. And the band uses several songs on this CD to spotlight Ivan’s virtuoso capabilities. Manuel Obregon also has his fair share of piano solos. Besides plying keyboards for Malpais, Sr. Obregon is the president of Papaya Music, Costa Rica’s premiere music label. But Malpais remains Fidel Gamboa’s band, and he its bandleader, from a musical standpoint. Fidel takes many opportunities to lead the direction of the band with his flawless guitar playing, while his brother Jaime, the group’s bassist, handles most of the lyrics.

As noted in the liner notes and clearly demonstrated on this recording, “live songs take on a different aspect than those recorded in the studio”.  And, as always, the inimitable Papaya CD packaging lends to the feel of the music and accents the attention to detail these artists take in their work. The CD jacket is a double fold-out and comes with an extensive booklet in Spanish and English. The tangible feeling while listening to this recording is like that of visiting an old friend. I am not a big fan of live recordings, but for this one I most enthusiastically make an exception.
The CD is available at the Jaime Peligro book stores in Playa Tamarindo, Quepos and Nuevo Arenal, where they will sample the music for their customers. Any comments concerning this article are gladly welcomed.
Posted by Jimmy Danger at 1:22 PM No comments: