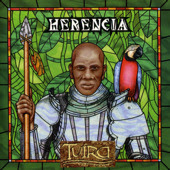 Although he was born in Mexico, Romulo Castro’s parents are Panamanian and he was raised in Cuba. He “came home” to Panama in the late Seventies but his collage of musical tastes had already been firmly put into place, both in his ears and in his soul. That multi-cultural embrace comes across strongly in his album “Herencia”, which he recorded with his nine piece band, Tuira. The CD is a blend of bossa nova, samba, rock and Panamanian folkloric music, all with a pronounced Caribbean backbone. His band is comprised of guitars and bass, keyboards and horns and an array of indigenous percussion. If this sounds like a potpourri, it is, but it is also anything but garbled. “Herencia” is Castro’s fourth CD and the twelve selections arrive like individual entrees rather than a mixed stew.
At times the music is reminiscent of the style of Guillermo Anderson from Honduras, and that is a good thing. Like Anderson, Romulo has a sweet voice that is complimented by the musical styles which he interweaves around it. The band members are an interesting cultural mix as well. Keyboardist and arranger Luis Thomas has worked with an array of artists from Ruben Blades to Air Supply. Percussionist Tony Martinez has also worked with Blades and with Sting. Kansas transplant Marco Linares plays guitar and adds background vocals, while Cuban transplant Wichy Lopez is a horn master, playing trumpet, flugelhorn, flute and sea conchas. A veteran of half a dozen Panama bands, Germain “Sparks” Dawson handles the heavy bass. Dino Nugent is the musical director and arranger. He is Panamanian, trained in Brazil, and adds keyboards on a few songs, too. Reynaldo Cruz and Guillermo Franco play a small army of percussion instruments. It’s an extensive entourage and each player brings their own flavor to the mix.

Castro is meticulous in his work: his first album, “Amor a Medias” was released in 2001, his second, “Travesias” in 2003 and his third, “Palabra de Cantada” in 2006. He spent about two years in preproduction for “Herencia”, writing songs and assembling the band, scouting recording studios and labels, graphic artists and the like. A total of about forty persons were used in the entire production of the disc. Standout songs on the album include “Amor en el Tiempo de Colera”, an airy, Caribbean sound with a Gabriel Garcia Marquez title. Que romantico! I also like “Estoy en el Puertomarte Sin Hilda”, with its slick, swingy, big band sound, and “Otra Cancion de Amor”, a straight-ahead rocker...
All the songs were written by Romulo. It was produced and recorded in Panama, mastered in Puerto Rico and distributed on Castro’s own independent label, Naranja Studios. The album has an impressive list of guest artists, no less than twelve horn players and eight percussionists, giving the final product an overall full sound. The disc is available at Jaime Peligro book store in Playa Tamarindo, where they will gladly play the music for their customers.All comments concerning this article are welcome.

Posted by Jimmy Danger at 4:37 PM No comments: