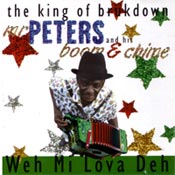 Boom and Chime of Mr. Peters

Wilfred Peters began playing the accordion at the age of seven, instructed by his father, as they toiled in a logging camp near the Suburn River in Belize. The music was based in Creole, Jamaican Mento and Calypso, syncopated rhythms, and the Afrikaner style of phrase and response, refined through generations in the Mahogany camps. “We didn’t have radio back then,” Peters has joked. In fact, very much like Caribbean Calypso and Guanacaste folk music, Belizean Creole is a form of music with a lot of wit, as well as being a way to spread news and gossip.

In 1970, Mr. Peters was making five dollars a day as a construction worker in Belize City. He decided to form a trio and start playing at night in the clubs there. Within a short amount of time, The Mahogany Chips were performing for five dollars a show. They quickly changed their name to Mr. Peters and his Boom & Chime, a name used for a local percussion instrument that is struck on one side with a wooden mallet (the boom side), and the other (the chime side) with a drum sack. Many regional musicians, in fact, prefer playing “found” instruments, such as the jawbone of an ass or conch shells. The music has been dubbed “Brukown” and Wilfred Peters has been proclaimed its king. After sixty years of playing this Belizean music, Mr. Peters was recruited to record a CD with Stonetree Records, the quintessential recording company in Belize. The result is a continuous frolic through eleven Peter’s original songs, along with two traditional tunes, titled, “Weh Mi Lova Deh”.

I asked Ivan Duran, Stonetree’s founder and president, what he remembered about recording the band for this disc. “A lot of fun recording them. And lots of rum,” he joked. “They never liked repeating songs more than a couple times. It kept the music fresh.” The band consists of Mr. Peters on vocals, accordion and banjo, Mr. Lenox Blades on electric guitar and backing vocals, with Mr. Egbert Beltran on jaw bone as well as backing vocals. Wilfred’s son, Mr. Wilfred Peters, Jr., plays the boom drum and ding-a-ling, while Mr. Francis “Swapy” Lewis is on the tumbas, known to the rest of us as congas. And that’s Mr. John Matura on the steady bass. The songs alternate between the Afrikaner/Mento styles of singing a line, with chorus refrain, such as the first song, “Llebam Bokotora”. Other songs follow the storyteller theme, such as “Man Wid No Uman” (Man with no Woman). There is definitely a barroom, zydeco influence in the music as well, something that encourages the listener to hoist another one and continue with the good times.

In 1997, Wilfred Peters performed for Queen Elizabeth when she awarded him with an MBE for cultural contributions. He has toured Mexico, Spain, France, and North America. He was awarded the Meritorious Medal by the Governor General of Belize in 2005. And now, The King of Brukdown, Mr. Peters and his Boom & Chime have graced us with a CD of his recordings, allowing us all to participate in his legacy. Wilfred Peters passed away last month and to commemorate his legacy, Stonetree has reissued the CD, which is available at the Jaime Peligro book stores in Playa Tamarindo, Quepos and Nuevo Arenal.All comments concerning this article are gladly welcome.
Posted by Jimmy Danger at 1:32 PM No comments:

Crazy From the Heat 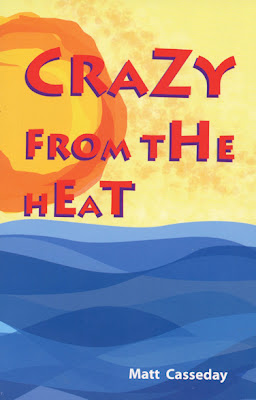 Crazy From the Heat

Writing humor is a cruel, nasty and thankless endeavor more times than not. Trust me because I have tried. Telling a humorous story in person to a group of people is completely different because the speaker can control the pace, the cadence, the intonation and eventually, the punch line. Writing these same words onto a page, handing it to a complete stranger, walking away and allowing the writing to convey humor on its own takes a leap of faith and a unique storytelling talent for the humorist to succeed. And Matt Casseday has pulled it off.
Sr. Casseday is a fifty-something ex-pat who has been calling Costa Rica home for more than two decades. He has been living in the Quepos area for about half that time and writing columns for Quepolandia, the local monthly magazine there, for more than five years. He recently culled through his collection of articles, selecting fifty-four of them to compile into a publication of his own, titled Crazy From the Heat. I think the operative word in that title is the first one, and I mean that in a good way. Matt takes a wry look at the trials and tribulations of living within another culture, specifically, being a “gringo in Ticolandia”, as he calls it. Sr. Casseday has lived and worked in a few different locales as well as owned a car and a business in Costa Rica, is married with a Costa Rican woman, and in short, has easily garnered enough material for his book with first-hand experience.
I’ve lived in Costa Rica for nearly eight years now and I could recognize myself and relate to many of the situations he describes in his stories. At times I found myself literally laughing out loud at some of Matt’s stories. His use of tongue-in-cheek and dry observational humor hooked me in more than once or twice. Certainly, not all the stories tickled my funny bone to the same degree. Humor is an individual taste. But I really enjoyed his piece titled “Gringos in Paradise” which describes four classic ex-pat caricatures. Despite the disclaimer, I swore I had really met each of these exaggerated personalities. I also laughed heartily at his article about the lack of political correctness embraced by the local gentry.
Matt Casseday could certainly never be labeled discriminatory; to the contrary, he appears to be more than willing to take a jab at everyone and anyone in this country (including himself) with equal verve. And it is this quality that for me lends to his credibility. The popular knock on satiric literature is that it lampoons the folly of existing situations without offering any viable solutions. I beg to differ. I think Matt has demonstrated a perfectly logical way to navigate contentedly through an illogical and at times frustrating scenario: with humor, and yes, compassion, the all-purpose salves to soothe your emotional wounds. Hey, maybe this gringo isn’t so crazy after all!

Crazy From the Heat is available at the Jaime Peligro book shops in Quepos, Playa Tamarindo and Nuevo Arenal.All comments concerning this article are gladly welcome.
Posted by Jimmy Danger at 1:03 PM No comments: 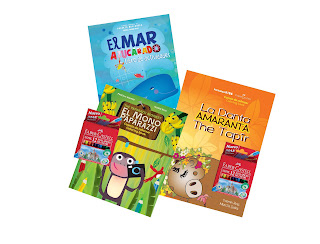 A Colorful Route
To Becoming Bilingual

Learning a second language at an early age is a treasure and a tool that lasts a lifetime and opens many doors. Children are naturally inquisitive and absorbent to new information. They are also attracted to visual stimulation and learning hand-eye coordination. It is no surprise, then that Pachanga Kids has become so successful. Their line of bilingual children’s books are wonderful, beautiful learning tools that also deliver inspiring messages for the kids, and perhaps the children’s parents as well. For example, when a school of fish in “El Mar Azucarado” decides the ocean is too salty and they want to sweeten it with sugar, the idea is voted upon by all the fish so that the popular decision is made. Likewise, in “El Mono Paparazzi”, when a monkey in the neighborhood finds a camera in the jungle and starts photographing his neighbors, he learns a valuable lesson about respecting other people’s privacy.

Always on the lookout for new ways to present their ideas, Pachanga Kids has now unveiled Pintacuentos (literally “stories to paint”), a collection of children’s bilingual coloring books that are based on their hardback stories. Besides “El Mono Paparazzi”, they are offering “La Danta Amaranta”, the story about of a mother tapir and Amaranta, her young daughter who has the magical ability to change the color of the surrounding landscape. The new books enable the children to participate by drawing and coloring, while learning the names of objects in another language. And who else uses a tapir as a main character? Pachanga Kids has also taken on the mission of schooling the next generation about the not-so-common sites in Costa Rica, to heighten the children’s awareness about the ecosystem and biodiversity, without using those “boring” terms. “The Sweetened Sea” is the third book in this first series and it is an activity book that includes not only coloring, but stickers, mazes and other activities as well. Each of the three books, geared toward children three years of age and older, comes with twelve “ecologically colored” pencils and is composed of twenty-four pages, with illustrations by the notable San Jose painter/printmaker Maria Salas and painter/designer Priscilla Aguirre, illustrating the stories told by writers such as the poet Eliot Greenspan and famed author/collaborator Yazmin Ross.

The goal of Pachanga Kids appears to be to help create well-rounded children, exposing them to science, art, music, literature social skills, and let’s not forget learning a second language on that impressive list. Everything Pachanga does is top-drawer and this new Pintacuentos line of learning and play books is no exception. Ms. Ross has true vision and exceptional organizational skills. Team Pintacuentos are no strangers to each other, having worked together with Pachanga Kids and/or Papaya Music, which Yazmin Ross helped to create.
Pintacuentos products are made in Costa Rica, offered at an affordable price and, along with the Pachanga Kids line, are readily available in Libreria Internacional, Café Britt and Wallmart stores throughout the country. In Playa Tamarindo, they are available at Jaime Peligro book store.  All comments concerning this article are gladly welcome.
Posted by Jimmy Danger at 2:12 PM No comments: