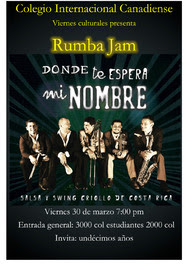 Having a Swinging Time

Criollo music actually originated in Peru, and was quickly absorbed by Venezuelan and Argentinean musicians. But swing criollo with its tico flavor had its genesis here in the Sixties with a merger of American Swing music and a Latin style of music from Colombia called cumbia. Initially, it was frowned upon, considered an uncultured, even crude style of music to a point where in the Seventies in San Jose, there were many signs at dancehalls and clubs proclaiming, “Swing Dancing Forbidden”. But the style continued and grew, both in popularity and refinement over the next forty years. Last 30 November, Costa Rica’s president Laura Chinchilla and Minister of Culture Manuel Obregon officially declared swing criollo “one of the expressions of dance of the intangible cultural heritage of Costa Rica”.
Now, here to usher swing criollo into official credibility is another merger: Bernardo Quesada and Rumba Jam, with their new CD, “Donde Te Espera mi Nombre”. Rumba Jam is an eight piece band made up of graduates of University of Costa Rica, the National Institute of Music and the National University. They recently participated in the Festival de Artes Turrialba 2011 and the Tegucigalpa Jazz Festival 2011 in Honduras. They have also worked with the popular San Jose jazz Band Escats. Rumba Jam is a brassy band of piano, bass, percussionists and a deep section of trumpet, sax and trombones. 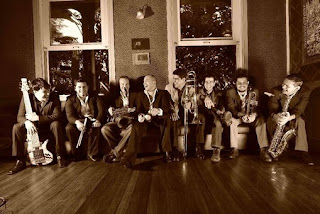 Bernardo Quesada is a household name in the music business in Costa Rica, recognized as a performing musician with two CDs, “Cuervo Blanco” in 2000 and “Mas Cerca de mi Corazon” in 2007. He is an established producer, working with Editus, Malpais, Ruben Blades and more recently with Perrozompopo from Nicaragua. In the past few years he has been touring the U.S., Mexico, Nicaragua, Guatemala, Brazil and Colombia.
The result is a very nice marriage of a fine composer and conductor working with a slick band. It’s obvious from the first song on the album, “Pa Curubande’ Yo Voy” that these guys are a nice fit and enjoy playing music together. Bernardo is a clever lyricist and has constructed songs to fit around the musical concept of the album; Rumba Jam does the rest. The music, which also includes Costa Rican Salsa, jumps right off the disc, directing the listeners’ feet to the dance floor. The title song, “Donde Te Espera mi Nombre” has a snappy, almost hypnotic staccato beat that is definitely infectious. Other standouts on the album include “De Tu Boca” and “Congoli Shango”, two very danceable tunes. The final song, “Salsa Marinera” is another tune with a mesmerizing beat, a nice send-off that should leave the listener anticipating the next project by Bernard Quesada & Rumba Jam.
Papaya Music, one of Costa Rica’s premiere recording labels, has decided to distribute the CD, a vote of confidence that should give this CD excellent exposure. The CD is available at the Jaime Peligro book stores in Playa Tamarindo, Quepos, and Nuevo Arenal, where they will gladly sample the music for their customers.
All comments about this article are gladly welcome. Please check out our Facebook page at Tamarindo Jaime Peligro.
Posted by Jimmy Danger at 2:05 PM No comments: 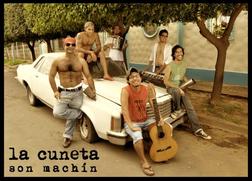 The musical genre referred to as chinamera in Nicaragua has always had the connotation of being the music of the poor, without finesse; but it is also the embodiment of the sounds that have been heard at festivals and street parties, at holiday parties and parties in general throughout the country literally for generations and is now appreciated, treasured and even revered by many of the general population. Enter: La Cuneta Son Machin, a young new band of six musicians from Managua that has fused this traditional musical style with their own humor, along with generous helpings of funk, pop and a good dose of Rock & Roll. Their goal has been to bridge traditional Nicaraguan culture with new cultural trends and on the way, they’ve become the best (and only) self-proclaimed “Cumbia-Rock-Latin-Chinamo-Funk” band in the country. Even their name (Curbside Sound Machine) is part tongue-in-cheek, but is also a fun way of saying “the peoples’ music. It started, not surprisingly, as a kind of joke during practices and sound checks – taking a traditional song and putting their unique spin on it. In a short time, they realized they had stumbled onto something new and enjoyed themselves while they were dong it. But make no mistake: through all the fun, they are still serious, talented musicians. The reaction to their live performances has been rapid and very positive. “We never thought the response from the people would be so big, so soon,” admitted lead singer Carlos “Frijol” Guillen. “We never imagined the people would be so enthusiastic”. 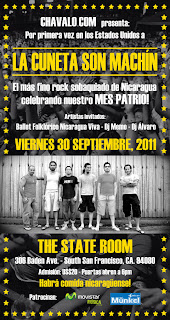 Papaya Music in Costa Rica, always a frontrunner in supporting new, talented Central American musicians, has opened a large door for them, in distributing their new, vibrant album, “El Zafarrancho”, a ten song set that comes close to defying musical boundaries in a seamless conglomeration of sound. The first nine songs were recorded in Managua; the final cut, the Carlos Mejia Godoy classic, “La Hacienda de Don Nelo” was recorded live, complete with jubilant audience responses, and nearly jumps out of the speakers. Other standouts include the traditional “Entre Ritmos y Palmeras” with a very untraditional, straightforward Rock & Roll drive to it. To be sure, guitarist Omar “El Profesor” Suazo was well educated at the School of Rock, and brandishes his style through the whole disc, especially in songs like “La Del Mono Colorado” and another Godoy song on the album, “Un Gallo de Chilincocos”. The whole album is full of fun and energy, breathing new life for a new generation into a Nicaraguan tradition that has earned its respectability. Two sure indications that La Cuneta has obtained the respectability they deserve: they were recently flown to South San Francisco to play the State Room at a show sponsored by Movistar, and they performed live at this year’s Miss Teen Nicaragua.
When asked if they were worried about being labeled a “gimmick band”, Frijol smiled wryly and mused, “It’s just the beginning”. I certainly hope so. The La Cuneta Son Machin CD, “El Zafarrancho” is available at the Jaime Peligro book stores in Playa Tamarindo, Quepos, and Nuevo Arenal. All comments to this article are gladly welcome. Check oout our facebook site at Tamarindo Jaime Peligro.
Posted by Jimmy Danger at 1:28 PM No comments: