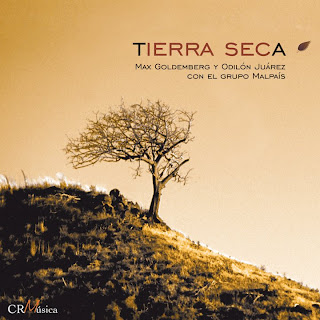 Max Goldemberg and Odilon Juarez were both born into musical families from the Guanacaste province in Costa Rica. They have been playing music together, trading songs, for most of their lives. For the sake of preserving some of the musical legacy of the area, they recorded a live set of their music with some of their musician friends and family and really didn’t think any more about it. It was the first time they have recorded any of their musical escapades. Some of the musicians in attendance went on to create the highly popular Costa Rican band Malpais, a staple with Papaya Music. Recently, Papaya uncovered this nugget and decided to dust it off and share it with a bigger audience.
The result is titled Tierra Seca and it is a fifteen song, forty-seven minute affair of Guanacaste folklore, sounding as if they were recorded in front of an audience on someone’s patio. And it probably was. The two singers trade local songs that are as much a part of the tradition and landscape as the huge trees for which this area was named and the families who for countless generations have sat in the shade of these trees to share these very songs. They are a throwback to a time when Guanacaste was a part of Nicaragua, blended with Spanish Colonial times here and even a little pre-Colombian culture, all filtered through time and translated into the songs of town fairs, weddings, serenades and funerals.
Max Goldemberg is the son of a Russian immigrant father and a Costa Rican mother and Odilon Juarez is the oldest of twelve children of Guanacaste lineage. Both come from families of poets and teachers, guitarists and singers, historians and minstrels. Two of Odilon’s nephews are Fidel and Jaime Gamboa, the founders of the aforementioned Malpais, whose idea it was to present this traditional music, interpreted by a modern band for a new audience. In the booklet included with the CD, Jaime imparts a wonderful tale of the cross-section of musical history in Guanacaste, glomming every passing style until no format is singularly recognizable and a new, indigenous one is spawned. He also tells a great story about working with his uncle (Max) making cheese, while singing traditional songs and making up new ones, essentially becoming new threads in the living, woven fabric that is Guanacaste folklore.
Jaime also gives a description of the storyline for each song that I will not try to reproduce here. Suffice to say that they are overtly allegoric and work on many levels. And that the music itself seems to have a life of its own: with five or six tempo changes per song, they are a veritable potpourri of every culture that has left an imprint on the area.
Yazmin Ross and Luciano Capelli, two of the Papaya CEOs, worked on the production of the CD, while the third, Manuel Obregon, plays piano on the disc. It all lends to the homespun feel of the album that it deserves. The result is that Papaya has once again held up their end of the bargain by producing a recording that preserves past legacies while forging ahead with modern Costa Rican culture. Tierra Seca and all Papaya CDs are available at the Jaime Peligro book stores in Playa Tamarindo, Quepos, and Nuevo Arenal, where they will gladly sample the music for the customer. All comments concerning this article are welcome.

Posted by Jimmy Danger at 3:59 PM No comments:

Osa On My Miind 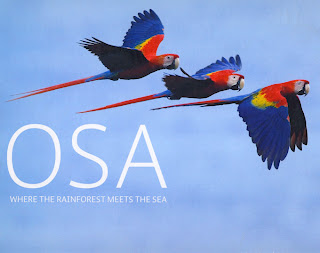 Osa On My Mind

It had never crossed my mind that one of the reasons that the Osa Peninsula has remained such pristine terrain is because its isolation has helped it to remain an entity. This geographical logic comes up early in the text of the stunning new book “Osa – Where the Rainforest Meets the Sea”, a successful collage of photographic art and insightful journalistic essays that portray this unique region in southwest Costa Rica like no publication that has preceded it. In fact, two-time Pulitzer Prize winner and Harvard Professor Emeritus Edward O. Wilson proclaimed the work, “the best way to experience (Osa) short of going there.” High accolades, indeed.

The two hundred twenty pages are separated into eleven sections with a forward by internationally renowned biologist, conservationist and nature writer Adrian Forsyth, certainly lending more credence to this two-man project by highly acclaimed nature photographer Roy Toft and writer Trond Larsen. Toft’s work has been featured in National Geographic, Smithsonian, Audubon and Discover Magazine, to name a few. He has been traveling to the Osa Peninsula for more than twenty years. His partner in this book, biologist/conservationist Trond Larsen received his PhD from Princeton and has been conducting scientific research on the Osa for more than a decade, has established a new biological station there and is currently a research fellow with the World Wildlife Federation and the Smithsonian Institute. These are all lovely credentials but honestly, the book speaks for itself and in ways that make the resumes seem inconsequential: it is a masterpiece. The scenery photos are spectacular and the writing is truly heartfelt. And I think it is the wildlife photographs that help to put this project head and shoulders above all others along with the obvious emotion, the care that went into the entire presentation. Trond told me that it took him nearly two years to find time away from his research biologist job to put together his half of the project and that Toft’s photos in the book are a cross section of literally thousands of shots he has taken in the Osa over the past decade or more.

More than fifty years ago, botanist Paul Allen wrote of the Osa that “it is difficult to believe that anyone could view these forests without emotion”. That sentiment emanates from every page of this publication. The staggering wealth of bio-diversity and life there is portrayed both in images and the written word, along with the sense of the delicate balance, the micro-environments and unique situation that exists at Osa. The inter-relationships, dependences, not unlike a woven fabric, are astounding. Trond Larsen has done a highly commendable job of making this information palatable to a lay person, such as me, for example. I have to say that reading the text in this book also has a certain sobering effect, an immediate diminishing of human ego.
The division of information into chapters is also subtly yet well calculated, beginning with a nice overview and history of the peninsula. Four of the chapters are dedicated to the different animal groups in the area: mammals, arthropods, reptiles and amphibians, and birds. Another chapter focuses strictly on the flora, while three other chapters each are immersed in a particular ecosystem: watersheds, the rainforest intersecting with the ocean, and the Golfo Dulce. The final chapter, “The Human Animal”, looks at how we have and will fit into the history of this unique area. The book also dedicates, not surprisingly, one chapter to the importance of conservation. Personally, I think the whole book does a good job of reminding us about this essential topic.
It is important to note that a portion of each sale of this book is donated directly to conservation projects on the Osa Peninsula. The book is available at all three Jaime Peligro book shops in Playa Tamarindo, Tilaran and Quepos, where the customer can view a sample copy of “Osa – Where the Rainforest Meets the Sea”. jaimepeligro123@hotmail.com
All comments concerning this article are gladly welcome.
Posted by Jimmy Danger at 8:36 AM No comments: