Largely overlooked by the global music scene, Central America is diverse and rich in its musical genres. Luckily for the music listener, there are people dedicated to exposing this treasure trove. Central American Music Box 2 is the second release contributed by Moka Discos in Nicaragua, Stonetree Records in Belize, Costa Norte in Honduras and Papaya Music in Costa Rica, under the collective name Central American Music Network. The first installment came out in 2010 and laid the groundwork in exposing both traditional and new, cutting edge musicians from this area. The new twelve-song CD is a welcome companion, expanding the list of bands and musical styles.

The album opens with “Si tu no quieres” by Yomira John from Panama who sings a style of Afro-Latin and indigenous music, mixed into her own unique style, which was captured by Ivan Duran, founder of Stonetree, in his Belize studio. Also from Panama is Cienfue, with “Cosita Linda”, a song that blends traditional and folk music from that country, meshed with straight-forward Rock. Honduran Guillermo Anderson turns in a nice version of “La noche y su cancion” with his sweet voice accompanying his clean guitar work in his trademark, upbeat Caribbean style. The touching “Canta mandolina” by Malpais from Costa Rica reminds us of how lucky we have been to experience the artistry of Fidel Gamboa. Another highlight on the album is “Ineweyu” by Aurelio Martinez, who has carried the Garifuna banner since the passing of Andy Palacio. Aurelio is another discovery of Ivan Duran, who was responsible for mixing the entire album. Nicaragua is well represented by Katia Cardinal with her passionate voice and Perrozompopo with his equally passionate delivery, which was also recorded by Duran. 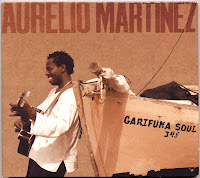 I enjoyed hearing The Calypso Limon Legends doing their song “Stop”, with their authentic stamp of calypso in the whimsical lyrics. The Garifuna Collective play the spellbinding, “Weiyasu”, a reminder of the African-Arawat culture that is rapidly fading. And I believe this is the goal for these music boxes: to preserve musical styles before they disappear and to present new sounds from the area and make them both available to the entire world. Lloyd Augustine from Belize seems married to these two ideas with “Chatuye” a song that gives a nod to his Garifuna roots while incorporating new vocal harmonies and guitar work.

New to me is Malacates Trebol Shop with their song “Todo se pagara”, a Guatemalan rock band with four albums under their belt, well known in their country for their uninhibited lyrics, and an impressive contribution to this collection. And I was happy to see Sonambulo included in the new Central American Music Box with “Bolero Carabali” from their new CD. They are a signal of a new direction in the area, with their infectious “psicotropical” music and deserve this recognition.
Central American Music Box 2 is the perfect progression from its predecessor, unveiling new and traditional music for a global audience. The result is a highly enjoyable serving of Central American music in all its diversity. The CD is available at the Jaime Peligro book stores in Tamarindo, Quepos and Nuevo Arenal. Any comments concerning this article are welcome.

Posted by Jimmy Danger at 4:13 PM No comments: