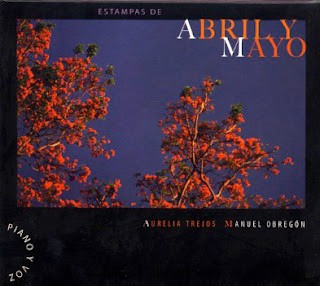 Estampas de Abril y Mayo
Manuel Obregon is an incredible pianist and an incorrigible musicologist who has definitely found his calling in life and is now reveling in it. Even before he helped form the Central American music label Papaya Music, he showed signs of his calling when he became enamored by the music of Paraguayan guitarist Augustin Barrios Mangore’ and transcribed and interpreted the compositions to piano. Along with being a member of Malpais, arguably the most popular band in Costa Rica, playing original tunes in a new style I have dubbed “modern folkloric”, Obregon also commandeers the Orquesta de Papaya, a culmination of musicians and musical styles from all of Central America. His last recorded project, “Piano Malango” was a unique presentation of instrumental interpretations, meandering down the river of historic and famous Costa Rican, Nicaraguan and Panamanian songs. 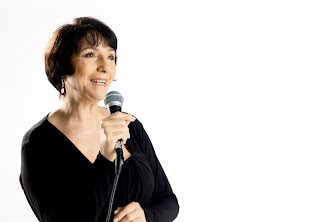 For his latest album, Manuel Obregon has ventured down a new tributary of that river, along with singer Aurelia Trejos, a fellow music historian, who has recorded and performed in the past with famed guitarist Dionisio Cabal as well as the group Cantares. Aurelia is an accomplished and recognized actress as well, hosting two popular television and radio shows in Costa Rica, “Somos Como Somos” and “Aurelia, Cancion y Pueblo”. The new album, titled “Estampas de Abril y Mayo” is a compilation of songs from the past two centuries, unearthed by Aurelia over a thirty year span, a collection of “campesino songs”, traditional tunes from the working class, mostly agricultural from the Central Valley of Costa Rica. It was recorded in the Papaya studio in Alajuela last February as a live duet and that interplay is conveyed in the warmth and intimacy that comes across in the music. And yes, that means it is simply piano and voice, which Ms. Trejos delivers in a lower register, giving the songs a somber, sepia-tone effect.

The title track, “Estampas de Abril y Mayo” captures the theme of the entire album: the passage of summer to winter, when the rains begin along with a kind of rebirth of the cycle of life, something celebrated in agricultural zones throughout the world. This collection of thirteen songs also captures and preserves a part of Costa Rican culture that is rapidly fading and I perceive this as one of Papaya Music’s and Manuel Obregon’s goals. From the Caribbean, the Calypso Legends and Walter Ferguson albums, from Guanacaste, the Tierra Seca album, along with the aforementioned Piano Malango all attest to this, let alone the Ray Tico CD, whose title says it all: “Solo Para Recordar”. The piano work on “Abril y Mayo” is playful and lilting, a delight to listen to. The interplay with Aurelia’s delivery is romantic in the true sense of the word. Whether the song is about hummingbirds, a typical meal, a rose, a river or an oxcart, this duo’s passion is at the forefront, distilling the sentiment of the song, to be enjoyed and appreciated by all its new listeners. As always, the packaging by Papaya is first-rate. The case is a double gatefold with a nice collection of Luciano Capelli photos and a booklet with lyrics and a description of each song.
Estampas de Abril y Mayo is available the Jaime Peligro bookstores in Playa Tamarindo, Quepos and Tilaran, where they will sample the music for their customers.All comments concerning this article are welcome.
Posted by Jimmy Danger at 11:33 AM No comments:

Jose Humberto Rodriguez Seas: The Arrow and the Sword 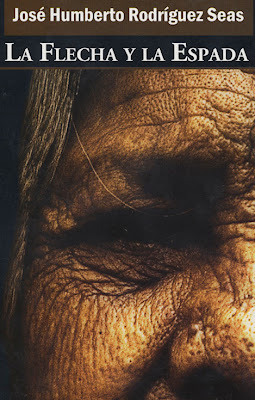 New Direction for the Arrows and Swords

Jose Humberto Rodriguez Seas is an educated man. A graduate of the University of Autonomy in Guadalajara, Mexico, he went on to receive his post-graduate degree in medicine at the University of Miami. He headed the medical section of the University of Costa Rica and was the vice-consul of Costa Rica in Guadalajara. And these are just a few of his credentials. But besides being an educator, Sr. Seas is also a man of passions, including writing. He has recently written a book, “La Flecha y la Espada”, about another of his passions, an accurate portrayal of the treatment of the indigenous peoples of Costa Rica by the Europeans who first arrived in The Americas. Using no less than twenty-three reference books, Jose Humberto has succeeded in presenting a scholarly text that is very readable for the casual reader. I have studied the Mayan civilization for more than two decades and read books such as “1491” so I have a good base of understanding of the subject matter but I still found the book full of interesting material and I think the flow of the book, along with its “voice” lend to its success.
The book is also full of facts and viewpoints. I did not know that Ponce de Leon, for example, discovered the Gulf of Nicoya or that the country of Panama was originally called Tierra Firme, or the history behind the naming of Cartago. I also had no idea that there was such an early faction of Austrians and Portuguese here.
The real insight in the book, however, is the view of the author: pointing out that very few of the indispensible native guides were even named in any of the diaries or letters of the explorer/conquistadors. Equally revealing come in particulars like the Catholic priest Estrada Ravago dubbing himself the “apostle warrior”, a mouthful in just two words. But these were the guys who would read their proclamations to the Americans that they were now under Spanish rule in Latin or Spanish to indigenous people who did not understand either language, and usually read them from a safe, peripheral distance from the villages, or even from their boats before disembarking. The indigenous people here were ready and even happy to embrace a new god, the one the missionaries were toting on a cross, but were also perplexed as to why the priests showed no interest whatsoever in their gods. Make no mistake; Sr. Seas is ready to point out that not all the indigenous peoples were pacifists. The Couto tribe, for example, lived in heavily fortified pueblos, with the decapitated heads of their nemeses on proud display, certainly a barbaric, albeit effective, practice by Euro-standards.
The hunger for power and more importantly, control of the mythical gold cities prove to be one of the strong driving points among the conquistadores, so it comes as no surprise that the Spaniards were fighting among themselves at least as much as they were defending themselves from ‘the locals’, who at times were more than willing to relocate to more desolate sites rather than deal with the Europeans.
Sr. Seas’ passion for writing shines through especially in his great scenery and nature passages, as the landscapes come to life through his written words, granting the reader a glimpse at some of the first Costa Rican travelogues, a wonderful glimpse of Costa Rica during the Sixteenth Century.
La Flecha y la Espada is available in Playa Tamarindo at Jaime Peligro Book Store.All comments concerning this article are gladly welcome.

Posted by Jimmy Danger at 9:03 AM No comments: 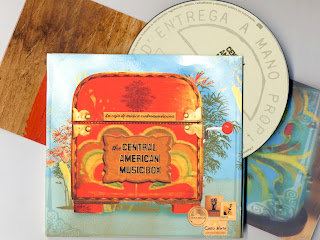 It’s a funny thing about music: it does not recognize the imaginary boundaries men have drawn on maps or in the ground. Put simply: music transcends borders.  It travels into the ear of its listeners then, hopefully, into their hearts as well, no matter where they live. And music does not need a passport to accomplish this. That is part of the appeal of World Music for aficionados from anywhere on the globe. We have had a plethora of Euro café discs, Middle Eastern lounge CDs and Indonesian trip-hop fusion albums while, regretfully, Central American music has been nearly unheard during this wave of international awareness. Until now. A joint venture by the four most popular and progressive recording labels in this part of the world has begun to fill that void with the release of La Caja de Musica Centroamericana, the Central American Music Box.
This compilation of sixteen songs showcases musical styles that ignore the borders of places we call Nicaragua, Belize, Honduras, Guatemala and Costa Rica. The Garifuna music represented here from Ivan Duran’s Stonetree label from Belize is a good example. The Garifuna culture was spawned nearly four centuries ago when survivors from two sinking slave ships began cohabitating with the indigenous Carib tribes, including the Arawaks on the islands of Saint Vincent (in the Lesser Antilles), Dominica and Santa Lucia, as well as with other escaped African slaves. Later, under British domain, they were relocated to the Honduran island of Roatan and from there they migrated to the surrounding countries in Central America. The resulting music is unique, mesmerizing, and anything but Latin.
Then there is Perrozompopo, a rock singer from Managua, Nicaragua, who records with Costa Rica’s premier label, Papaya Music. It’s a nice touch on this historic album to have Manuel Monestel with his calypso band Cantoamerica sing “Calaloo”, a song written by his mentor, the legendary Walter Ferguson and the contribution by the Calypso Limon Legends. This style of music has certainly travelled outside the Caribbean coastline and contributed to the creation of other musical styles, including reggae. The Moka Discos label from Nicaragua is represented by the fabled Duo Guardabarranco, along with Moises Gadea, internationally acclaimed Clara Grun and Katia Cardenal, the label’s founder. And the ethereal voice and variety of musical styles of Guillermo Anderson who co-founded the Honduran label Costa Norte with Max Urso is testament to the wide scope of rich culture here. Of course, no Central American compilation album would be complete without a song from the immensely popular Costa Rican band Malpais, and they are here, along with a solo piece from their pianist Manuel Obregon, one of the founders of Papaya Music. One of my favorites is Belizean Leroy Young, discovered by Ivan Duran doing his thing while washing cars in Belize City. He went into the studio and recorded his infectious art and now he’s a dub poet.
I have to admit that when I moved here nearly eight years ago, I had no idea of the wealth, diversity and depth of Central American music. This collaboration between the four major labels, under the name The Central American World Music Network, has done an excellent job of offering a sample of the broad scope of culture that lies within these imaginary boundaries.
I could not review this impressive new album without mentioning the artwork and overall production. In sharing the duties of production executive, Luciano Capelli from Papaya Music and the aforementioned Ivan Duran of Stonetree Records, along with Sylvie Duran from Costa Rica, who was instrumental in getting the key players together at the World Music Expo (WOMEX) last year in Copenhagen, have collectively done an incredible job putting this coalition of diverse talent together; Priscilla Aguirre from LaCabeza Estudio and Paula Cruz from Papaya have done a first class job in packaging and presentation, complete with classic Central American watercolor artwork and a bilingual booklet, with text by Yazmin Ross.
I have a feeling that this project is just the tip of the iceberg. Indeed, each of these four labels has an abundance of talent that could easily make this album the first of a series. As they say in the business: “It’s a monster!” Already, I can’t wait to hear the songs playing on Central American Music Box II. This new CD is availableat all three Jaime Peligro book stores in Playa Tamarindo, Quepos and Tilaran, where they will gladly sample the music for their customers. Jaimepeligro123@hotmail.com
All comments concerning this article are welcome.

Posted by Jimmy Danger at 2:39 PM No comments: