Once a Bad Girl, 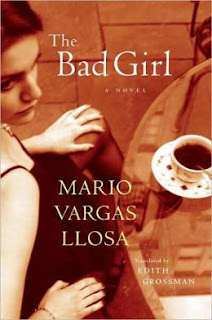 Mario Vargas Llosa is known for weaving stories like threads into an ultimate, seamless tapestry that far exceeds its individual components. He is also an enigma in that he gained acclaim as a writer while in his birthplace of Peru, became involved in politics there, grew disenchanted and then renounced his Peruvian citizenship. He moved to Spain. But he continues to write about Peru.
I’ve just finished reading his novel, “Bad Girl”, a novel where Llosa unequivocally answers the age-old question, “Which is the weaker sex?” Meet Ricardo Somocurcio, a 1950s Peruvian teenager living in Lima. He falls pathetically in love with “Lily”, who’s just arrived from Chile, with her exotic manner and colloquialisms. She allows Ricardo to hold her hand and no more, calling him “the good boy”. When her Chilean history is exposed as false, she vanishes.

Ricardo becomes a translator to fulfill his dream of living in Paris, which he does, though he never forgets Lily. And then, there she is again, in the City of Lights, this time calling herself “Comrade Arlette”, an activist on her way to Cuba. She allows a remote relationship to begin between them, one where she dictates the time and place to meet as well as every physical action between them, which generally focuses on pleasuring her exactly as she mandates it to occur, all the while referring to Ricardo as her “pissant”. And then, she is suddenly off again, this time to fight for The Cause.

And so she continues to disappear and reappear throughout this poor dog’s life, tugging on his leash the entire time. Whether she is Madame Arnoux, wife of a UNESCO official, or Kuriko, mistress of a sinister Japanese businessman, she is constantly reinventing herself with a smokescreen of lies, designed specifically for her own gains. She snaps her fingers and he comes running, even if it is half-way around the globe, to repeat “that sentimental crap” that amuses her so. Although their sexual forays revolve around what pleases her, she somehow remains detached the entire time, paying little or no attention to his desires. More than not having a conscience, she is truthful and proud of pursuing goals that exclusively revolve around her gains, be they physical, financial, or an elevation in her social status.

As with all of Llosa’s novels, we receive an historical backdrop, ranging from Paris and London in the Sixties, Tokyo in the Eighties and Spain in the Nineties. Because Ricardo stays in touch with his uncle in Lima, the author is also allowed to expound on the cultural and political climate and changes in his “former” country throughout nearly half a century.
Just as Everyman is a morality play that attempts to define human nature, Llosa seems to be writing his version of Everywoman, with a clear message of who he thinks is really the stronger sex. Randle McMurphy explained it best in “One Flew Over the Cookoo’s Nest” when he told the ward psychiatrist, “You know how it is, Doc. When they put that thing in your face, ain’t a man alive who will turn it down”.

Posted by Jimmy Danger at 1:15 PM No comments: