Bossa Nova Around the World 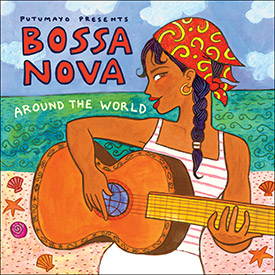 Bossa Nova Around the World

Most musical styles are not born: they simply evolve from other genres, being interpreted by musicians who are influenced by them. The Brazilian style of music known as Bossa Nova is no different, but it still has parents: samba is its mother and soft jazz its daddy. That’s my theory and I am sticking to it. Popularized in the late Fifties and early Sixties, the term literally means “new trend” and has now reached international recognition and influence, as demonstrated by the new Putumayo CD, “Bossa Nova Around the World”. The twelve-song album offers songs by artists from all over the globe, a true salute to Bossa Nova’s universal appeal. A typical bossa nova band would include a guitar and percussion section, often a piano, jazz horns (such as trombone) and very often a lush string arrangement as well. In my opinion, the female voice is a much better a translator of this genre than its male counterpart.

And this theory is demonstrated in the first song of the disc, “Jardim” by the Brazilian/French group Bri, delivering a classic Bossa Nova sound, a great intro to the album. Next, singer Nancy Vieira and guitarist Tito Paris, two musicians from Cape Verde currently living in Lisbon, team up for “Esperanza de Mar Azul”, another soft & lilting number. Didier Sustrac is next up, with “Tout Seul”, a song with a nice jazz beat. Didier is a guitarist from France who moved to Venezuela at the age of eighteen, then to Brazil two years later. He has recorded six CDs and remarkably, has written four children’s’ books as well.
“Melancholisch Schon” was recorded by 2raumwohnung, a Berlin band founded by Inga Humpe and Tommi Eckart, who originally teamed up to write a jingle for a television tobacco ad. The song unexpectedly became a hit and they were able to pursue collective careers playing music together. The song is another example of the far-reaching popularity of bossa nova as is “Menina Moca” by famed Serbian jazz trumpeter Dusko Goykovich, who is eighty years young and still going. The song is from his album “Sambo de Mar”, his first recordings of Latin Jazz.
Pierre Aderne was born in the south of France, but relocated as an infant to Brazil. As a teen he formed the rock band “Habeus Corpus” and when they disbanded, he moved to Rio de Janeiro where he found his real calling, as demonstrated in “Vida de Estrela” on this CD. Amanda Martinez is a self-proclaimed “Mexican gypsy” and has a wonderful delivery of “Hasta Que Pueda” on the disc. Nominated twice for best Latin Jazz Artist”, she has a perfect bossa nova lilt to her voice.
Other impressive performances are by the versatile Norwegian jazz singer, violinist and pianist Hilde Hefte with “Vakker Natt” and the final cut, “Mon Pere a Moi” by the Frenchman Kad Achouri, who has gained notoriety for mixing and looping, but this song has a funk all its own.
The entire compilation is a great demonstration of how this musical genre has captured the ears of music lovers all over the world. Bossa Nova Around the World is available at the Jaime Peligro book stores in Playa Tamarindo, Quepos and Nuevo Arenal, where they will gladly sample the music for their customers. Any comments concerning this article are welcome.
Posted by Jimmy Danger at 11:58 AM No comments: 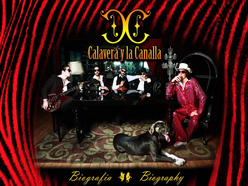 Overnight Success in Just a Decade

Lucho Calavera and his band La Canalla recorded their entire debut album “Ni Pa’ Que Te Cuento” in the Papaya Music Studio in Alajuela in just two and a half months, an incredible, very efficient accomplishment. Then they spent nearly a year crafting and polishing their model. A band that has a reputation for enjoying themselves onstage, including live dancers as part of their entourage, became very serious in the studio, expanding the band from five players to nine, to include more percussion and a horn section, further indication of the scope of their vision. That vision is initiated by singer/songwriter Lucho Calavera, the altered ego of Luis Arena, who has been in the Costa Rica music scene for some time. He recorded two albums in the late Nineties with El Parque, the second CD on the Sony Music Label. They were the first Costa Rican band to air a video on MTV Latino. He then went solo, working on projects with other local bands, most notably Evolucion. He also sat in with Soda Stereo, a popular band from Argentina. Arena then relocated to Madrid, evolving musical influences and his pseudonym, with gypsy bravado wrapped around it.
The album is impossible to categorize into a single, specific style: a polished blend of funk, fusion, cumbia, flamenco, Creole, ska, reggae, pop, rock, even cha-cha. Any band making music combining all these styles and a little Arabic slang is making a clear statement: “I do what I want”. In every breakout musical movement, there comes a beacon, a style to emulate. And Calavera y la Canalla, with “Ni Pa’ Que Te Cuento” could be just that – a new album that can put modern Costa Rican music on the global musical map.
The CD opens with “Chico Calavera”, an autobiographical song that also explains the “don’t try to tell me how to do it” philosophy of the entire band. “Solo Conmigo” continues that scoundrel voice, this time alternately in Spanish and English (they do what they want). “Contracorriente” is included in the new Papaya CD “Costa Rica Reggae Nights 2” and for a good reason. The song “Amor Bendito” is an homage of Lucho’s love for Costa Rica. Other standout songs include “Babylon” and “Luna Triste” and I like the short instrumental “El Camino”. All the songs are fleshed out very well by the band, giving them another dimension.

Rock and Roll overnight sensations simply do not exist. The Beatles, for example, played strip clubs in Hamburg before they were finally discovered with their “new” sound. While it appears that Lucho and the band have just arrived on the scene, they have obviously paid their dues. “I’ve waited ten years or perhaps all my life to make this album,” he explained. It has been worth the wait for his audience.
La Calavera y la Canalla and all Papaya CDs are available at the Jaime Peligro book stores in Playa Tamarindo, Quepos and Tilaran, where they will gladly sample the music for their customers. All comments about this article are welcome. Please check out our Facebook page at Tamarindo Jaime Peligro.

Posted by Jimmy Danger at 8:58 AM No comments: