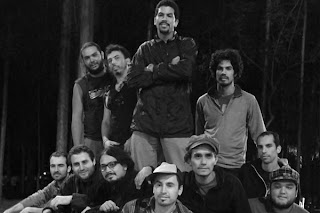 Sleepwalking to a Funky Beat

What do you get when you combine eleven musicians from Costa Rica, Cuba, Colombia and El Salvador who create a fusion sound of reggae, cumbia and funk, then let them tour Europe? If you ask the musicians of Sonambulo, they will tell you that the result is a new style of music that they call “psicotropical”, a catchy phrase for their very infectious music. The band’s first album, “A Puro Peluche”, was released in January 2009 with a lot of positive acclaim and little distribution. It was reissued in 2010 and promptly won the ACAM Best Tropical Album award. Getting heard is always a problem for any independent performer, no matter how good or popular you might be. But the Costa Rican label Papaya Music has recognized the talent of this band and has decided to include them in their catalog, which could be the break, the springboard, this band deserves. Sonambulo actually began as a music project five years ago, evolved and influenced from the street circus performances, Magos del Tiempo, in an effort to amalgamate social and environmental causes in a musical score that combines traditional and modern Latin and African beats into a creative new sound. The music definitely has all that and a carney, gypsy feel to it as well. I also hear a Middle Eastern influence and jazz roots as well, and yes, a little Rock & Roll, too. The result is truly global music, as can be heard in all thirteen songs on the album. Of the eleven musicians, there are three horn players, a keyboardist, and electric bass and guitarists, with the five other musicians supplying a wall of percussion, which often directs the sound of the band. I also find it interesting to have five members contributing vocals, throwing another variety of sounds into the mix. It’s hard to put a label on their sound (except psicotropical); it reminds me at different times of many styles, embracing them all, with a myriad of tempo breaks running rampant throughout the album. And the music is certainly danceable. Through all the creativity of this nearly hour-long disc, it is obvious that these guys are enjoying themselves.
Standout songs on the album include “Zona Roja”, led by the funky bass playing of Tito Fuentes and “Jabali Montuno”, with the reggae influenced guitar of David Cuenca. The title song, “A Puro Peluche” has a Trance beat that is hypnotic, with the excellent keyboard playing (and all throughout the album, really) of Manu Davila. “Animal” is another notable, original song on the album, along with “Chusma Funk”, two songs that defy conventional terms, helping to define the new psicotropical category. 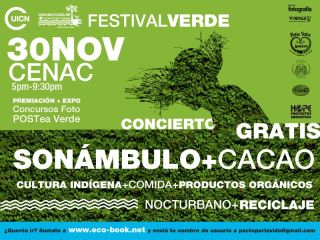 The band has just completed a twenty-five date tour of Europe in a six week span, helping to confirm their global appeal. They are now reportedly working on their second CD and I, for one, am anxious to hear it. Papaya Music has been promoting new local talent for some time and combined with their recent release of the CD by Lucho Calavera y la Canalla and now Sonambulo, they are well represented by modern, Twenty-First Century Costa Rican music.
The new CD is available at Jaime Peligro book store in Playa Tamarindo, where you can sample the music. All comments concerning thhis article are gladly welcome.
Posted by Jimmy Danger at 1:21 PM No comments: 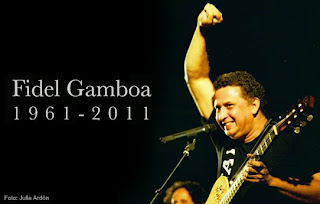 The show at the 212 Club in Heredia with the Guatemalan band Alux Nahual had gone well. Fidel Gamboa had shown up in support of the visiting band and had stayed to play with them in a set that went very well. The musicians stayed backstage after the show for some time, then Fidel, the co-founder of the immensely popular Costa Rican band Malpais went home and went to bed, where he was found in the morning, lifeless. He was just fifty years old, a cultural voice of his generation, silenced.
Growing up with his brother Jaime, at times on their grandfather’s cattle ranch in Guanacaste, Fidel Gamboa would rise early to help milk the cows, then eat a second breakfast with his grandmother. When they were a bit older, the two brothers often worked with their uncle Max Goldenberg, a cheesemaker and part-time musician, also in the province of Guanacaste. Both were drawn toward composing music and the storytelling involved. Fidel went on to study music in theory and practice at the University of Havana to perfect his work on the clarinet and saxophone. He returned after two years to study and work at the jazz workshops at the University of Costa Rica in San Jose. It was there he began a working relationship with Adrian Goizueta, eventually playing in his band for seventeen years, along with his brother Jaime, while building a lifelong friendship with Goizueta.

In the early Nineties, Fidel changed musical direction, picking up a guitar and started composing more and more songs. He wrote a lot of material for advertisements, and appeared on more than thirty albums. He found that he was writing modern material that had roots in his Guanacastecan culture. He and Jaime were backing their uncle Max as Tierra Seca for an album for their friend Manuel Obregon, a founding member of the highly successful Costa Rican music label Papaya Music, when Obregon decided to sit in on piano and voila! Malpais was formed. The band went on to become one of the most popular in Costa Rica, but it was always motorized and directed by the Gamboa brothers, with Jaime scoring most of the instrumentation and Fidel writing and singing a great bulk of the songs. A workaholic, Fidel always had several musical projects alive at the same time. Among them were “La Cancion de Edad”, in addition to “Cuarteto Sporadico” and other splinter projects with Manuel Obregon, along with his work for national conservation and for children’s education in Costa Rica. Fidel was also the recipient of the Achilles Echeverria and the ACAM awards. 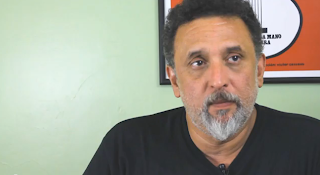 Fidel was once asked what he would have been if he hadn’t been a musician. His response was that he would like to have been a sculptor. I think that wish became real, too, because he has sculpted songs that have touched people, generations, and even a country. He will always be missed and can never be replaced. Thank you for your gift of songs to us, Fidel. Words cannot express our loss.
Posted by Jimmy Danger at 9:48 AM No comments: 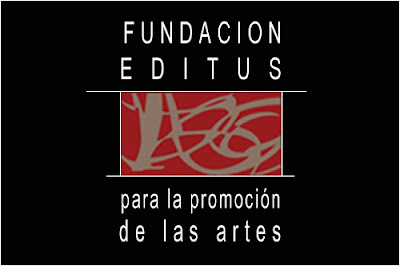 The Kids Come First
Musicians throughout the world have a good reputation for giving back to the community, especially to the next generation, the children, and Central America is no exception. Costa Rica’s three-time Grammy Award winners Editus are a good example. They have recorded twelve albums in their seventeen years together as a group and in an effort to give back to the community, they founded their Acadamie de las Artes in San Jose, Costa Rica in November 2004. It is a modern conservatory that integrates diverse elements of artistic development, not only for music but for dance, literature, theater, painting and photography as well. The music classes they offer are incredibly staffed and diverse, with three drum and percussion instructors, six teachers specializing in voice, lyrics and songwriting, four electric guitarists, six acoustic guitar instructors, two violinists, a cellist, five pianists, one saxophone teacher and a bass guitar instructor. Not surprisingly, some of the current teachers are former students, a sure sign of the Acadamie’s success. The academy also offers a sound lab to teach engineering, mixing, mastering, even DJ sampling. And there is a chorale group who performs a minimum of twice a year with selections as varied as Gospel and spiritual, Rock and Pop, Costa Rican and Latin American songs, in an effort to create a completely diverse chorus. 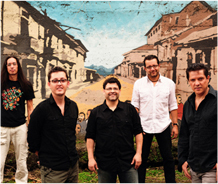 On their website, the Acadamie displays three edited compilation videos of student recitals with Editus members accompanying them, obviously enjoying the fruits of their labors. The Acadamie has certainly proven its success: the school has a maximum occupancy of three hundred and has had a full curriculum with an extensive waiting list since opening its doors. Will all these students eventually find a career in music? Probably not, but they will undoubtedly learn a lot about themselves: things like discipline, their natural abilities, and what moves them on an emotional level; the lessons that develop self-esteem. Those are all good things to take from the classroom. 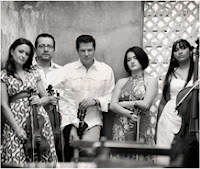 In 2007, the three piece instrumental band launched Fundacion Editus, offering opportunities at the Acadamie de las Artes for economically challenged children to develop their artistic talents. The success rate has been very positive, finding “diamonds in the rough” and allowing the students to bloom at whatever artistic skills they are most adept. Vocalist Luis Gabriel from Nicoya is a good example. After two years with the Acadamie, “Luis Ga” went on to compete and place second in the international festival Vina del Mar in Chile. He also released a version of “Desnudame el Alma” which has received a lot of radio airplay. Another notable is Argielette Chaves, a singer from Puntarenas, whose family scraped to put her into medical school in San Jose. At one point she had to abandon her musical dreams, until the Acadamie stepped in, along with their friend Marta Fonseca, who took “angelargie” under her wing. Ms. Chaves recently participated in the soundtrack for “Cartas a Elena” by Edin Solis, the guitarist of Editus. You can see it on You Tube; in fact, many of the Acadamie students participate in the video.
Editus obviously understands the importance of keeping the arts alive, especially through the next generation. They have discovered the Fountain of Youth!
All comments about thhis article are gladly welcome.
Posted by Jimmy Danger at 3:19 PM No comments: