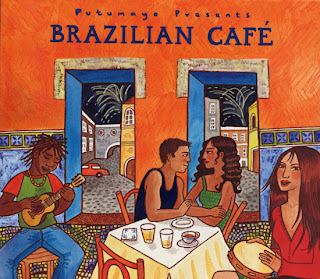 As the world’s largest coffee producer, café scenes have become an integral part of Brazilian culture and landscape, as has its unique style of music, blending samba, Portuguese, bossa nova, Spanish and jazz into a unique indigenous blend. According to popular legend, Brazilian songwriters Carlos Jobim and Vinicius de Moraes were sitting in one of their favorite cafés in Ipanema, a fashionable district of Rio de Janeiro, watching all the pretty women walk by, especially the knockout from the neighborhood, Helo Pinheiro. Their ode to her has become a timeless, internationally recognized song, “The Girl from Ipanema”.
I have already mightily extolled the virtues of the Putumayo label in previous editions of this column, so I will simply cut to the chase this time. Lately, they have been growing thematic titles, with their “lounge” and “groove” compilation albums from different regions of the world. The best of each of these, I believe, have been the “Brazilian Lounge” and “Brazilian Groove” CDs. Ditto, the “Acoustic Brasil”. Putumayo’s new vein has been a café series. I have heard the French and Cuba café albums and I like them, but I’ve been anticipating the Brazilian Café CD and last week, Putumayo released it in Costa Rica.

This collection of twelve songs is diverse and as with the other Putumayo Brazilian CDs, I think that with few exceptions the female vocalists best portray the sensuous side of Brazilian music. The Teresa Cristina offering, “Para Nao Contrariar Voce”, with her three piece band Grupo Semente, is a good example. Originally a manicurist and cosmetic salesperson, Teresa broke onto the Rio club scene at the age of twenty-six and never looked back. The song selected is one from the legendary samba singer/composer Paulinho Da Viola, a great choice, as the torch is passed to the next generation of Brazilian torch singers. Another great cut on this disc is the live track of “Feliz e Triste” by Ceumar, whose father was a well-known Brazilian singer, too. Ceumar’s pristine voice shines through on this acoustic bossa nova number.
Rosa Passo’s contribution “Pequena Musica Nocturna” is another standout. Passos is also from a musical family and has performed with Yo Yo Ma, Ron Carter and Paquito D’Rivera, to name a few artists. In addition, Marcia Salomon contributes her rendition of “Quando o Carnaval Chegar”, by famed singer composer Chico Baurque, with her own stamp of style on the song. My personal favorite project on the disc is “Arranco de Varsovia” by the Brazilian samba band Forca da Imaginacao, formed by pianist Arranco de Varsovia. The band specializes in updating classic samba songs while putting their own spin on them at the same time. It’s a statement about the all-encompassing modernization and face lifts currently going on throughout Brazil, in lieu of hosting the upcoming World Cup there.
All the Brazilian music on the Putumayo label that has been mentioned in this article can be purchased at the Jaime Peligro book stores in Playa Tamarindo, Nuevo Arenal and Quepos, where they will gladly sample the music for their customers. All comments concerning this article are welcome.
Posted by Jimmy Danger at 3:27 PM No comments:

Best of What We Are

Best of What We Are

More than one hundred thousand Nicaraguans died in the last years of the Somoza regime and during the U.S. sponsored war with the Contras, more than three percent of that countries entire population. It is a sobering statistic.
John Brentilinger is a professor of philosophy at the University of Massachusetts, Amherst and the author of “Villa Sin Miedo”, a book about a squatters’ village in Puerto Rico. He then published his second work, “The Best of What We Are”, chronicling his time spent in Nicaragua from 1983 to 1990, during Sandinista control there after they toppled the Samoza regime and won an open election. In his seven extended visits to Nicaragua, Brentilinger lived with families in Managua, the capital city, and in Leon, near the Honduran border. He lived in their houses, ate with them, participated in demonstrations, attended funerals, visited co-op farms and schools, community clinics, hospitals and cultural centers as well. He openly sided with the Sandinistas and was initially surprised by their candor and friendliness but quickly warmed to their ways. He was constantly assured by the people of Nicaragua that they have compassion for the people of the United States and it is only the political policies of that country that they take issue with.
An interesting twist in the division of politics in Nicaragua is the way it seeped into Catholicism there. Of the clergy, about half the priests sided with the Sandinistas and the other half backed the Contras. Every single bishop, however, sided with the more affluent, U.S. backed Contras, a statement in itself.
One section is of the book is divided into journals the author kept during his stays in the small villages of Condega, Las Colinas, Yali’ and Matagalpa and the capital of Managua. It lends to the personal, human aspect of the writings and the author’s simpatico. Equally impressive is the number of norteamericanos he encounters who are volunteering their time as teachers, nurses, doctors and technicians to aid this struggling cause. Another interesting aspect of the Sandinista movement was the elevation of the status of women, as reported by Brentilinger in his book. They assumed roles in the uprising that had been exclusively filled by men prior to that: everything from fighting in the fields to positions of authority and this had an effect of also liberating them in the social aspects of everyday life as well.
John’s interviews are sobering, to say the least. It quickly becomes apparent that every single person in each of these small towns has at least one direct family member who has been killed by the Contras, and in many cases several loved ones. One of the most chilling was Maria Mendoza in Condega, whose husband was brutally executed when she was eight months pregnant with their second child.
The participation by the U.S. in funding the Contra rebellion along with the import and export embargos placed against Nicaragua is evident everywhere. For example, there is a plethora of farming machinery and automobiles sold during the Samoza regime that can no longer be repaired be repaired and medical supplies are at a premium.
What shines through in this account is the strength and sense of pride of the Nicaraguan people, something that can never be bought or revoked. All comments concerning this article are gladly welcome.
Posted by Jimmy Danger at 1:08 PM No comments: