Devil of a Blues Band in San Jose

The live music scene has been a vital part of San Jose for some time now. Until recently, finding a schedule for all the nightclubs and an updated calendar with the names of bands and where and when they are playing was a job worthy of a member of a detective agency. Not any more. Mauricio Ledezma, an enterprising San Jose musician has taken it upon himself to publish En Tarima, a magazine devoted exclusively to the Costa Rica music scene, mainly in San Jose. The publication can be picked up at a variety of cafes and nightclubs in the capitol city or can be viewed online at www.bluesdevilsband.com and clicking on En Tarima. Mauricio has been at it for eight months and the response, he told me, “has been great for musicians and concertgoers.”  He admits that at first it was “not so terrific from potential advertisers, although it is getting better.”
Born in Chicago, Mauricio moved to Houston with his parents, who are Costa Ricans. He started his first paper at the age of eleven, while he was in school in Houston. In fact, he explained to me that he fashioned En Tarima after “Music News”, a music publication out of Houston. “I noticed the amount of gigs that musicians have in the San Jose area,” he explained, “and a lot of people never find out about them.” 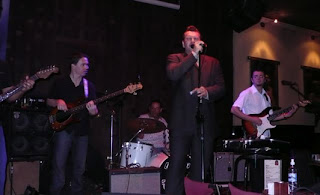 But En Tarima is not Mauricio’s whole story.  He is also the frontman and harmonica player for the Blues Devils, a band that plays the San Jose music circuit regularly. The band formed loosely in 2001 as a project for the band members to play when Lezdezma was visiting from Texas twice a year. Mauricio moved to Costa Rica permanently in 2003, which established the band as a concrete entity. He learned to play harp twenty years ago in Houston and was a sideman for Big Robert Smith and Joe Guitar Hughes. He is also quick to point out that he is an afecianado of all kinds of music, not just the blues. Among his broad variety of musical influences, he cites Miles Davis, Little Walter, Ian Anderson (from Jethro Tull) Brian Setzer of The Stray Cats, Otis Redding and Muddy Waters.
The other members of The Blues Devils are: Fernando Alvarado on drums, Franco Torterol on bass and Edgar Sequiera and Lucho Aguilar on guitars. The music is a blend of Chicago blues, ala Muddy Waters, with a touch of Albert Collins’ Texas blues, sprinkled in with a dash of West Coast swing, in the style of Little Charlie and the Nightcats. All the musicians in the Blues Devils contribute original songs. They also cover songs by all the aforementioned musicians, as well as songs by The Fabulous Thunderbirds, Jeff Healey, Otis Rush and Junior Wells. The band had a successful showing at both 2006 and 2007 Vida Loca Blues Fest. Local saxophonist “Bad” Brad Schmidt told me recently that he has jammed several times and that hey are a lot of fun to play with. I have found that one of the real indicators of a good band is when another musician gives them an unsolicited compliment, as Brad did.
This band is definitely worth checking out. They are available for bookings at a very reasonable price. And the next time you plan to visit San Jose, check out En Tarima to see what shows you might catch. All comments concerning this article are glady welcomed.

Posted by Jimmy Danger at 9:22 AM No comments: