A Glass of Wine with Charly Lopez 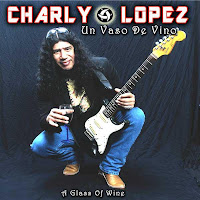 A Glass of Wine with Charly Lopez

I’m listening to “Un Vaso de Vino”, the new self-produced album by local musician Charly Lopez and I realize that he has really been around. You can hear it in his musical influences. Born in Montevideo, Uruguay, Charly played in five different bands there during a twelve year span: Vision, Aeroplano, Las Bestias, Mamut, and Alvacast, recording four albums with this band. Charly relocated to Canada in 1992, playing with three different bands over a span of more than a decade and recording his fifth CD with Tears for the Dead Gods, before moving to Costa Rica when a friend suggested he come down and play at his restaurant in Brasilito. His initial four month stay here lasted six months, with Charly playing five nights a week. He went back to Canada for about seven months before returning here to live in 2005.
Recording a solo project is different than that experience with a full band. Charly decided he wanted to return to his home country, as he told me, because “I wanted this CD to be by a Uruguayan, recorded in Uruguay, made in Uruguay!” He also told me that he grew in a beautiful country that, at the time was, unfortunately, being run by a dictatorship that had curfews and did not allow men to have long hair and that, being a rebel, this is how he discovered Rock & Roll.
The album is a compilation of songs that Charly has written throughout his career. It should be noted that, while he did well to recruit a guitarist and percussionist for the recording, it is Charly who sings all lead and background vocals, plays guitar as well as a mean bass throughout to album and even plays the drums on “Until the End of Time”, the one song recorded in English.

The album kicks off, appropriately, with “Tres Milenos” and sets the tempo for the disc. It’s a great opener with a catchy hook of infectious, straight-forward Rock ‘n Roll and an homage to Charly’s first thirty years in the music business. Other stand-outs include “De Norte a Sur”, “Jaque al Rey”, and “Soy Zero”, all with very nice, upbeat tempo changes. The finale is the title track, “Un Vaso de Vino”, a kind of send-off that closes this nearly hour-long album. Charly told me he co-wrote it with his longtime friend, Leo Rodriguez, as a kind of dedication to their friendship. The entire album is a stroll down Charly’s musical career and the music a smart potpourri of Charly’s musical influences, all presented in original material.
Charly Lopez has been a member of Electric Storm since 2006, performing regularly around Guanacaste. He also performs solo, as he did recently at El Coconut in Playa Tamarindo. The CD can be purchased at his shows and at Jaime Peligro book store in Tamarindo and Super Massai in Flamingo. His songs can be downloaded from iTunes and from the website: http://www.reverbnation.com/charlylopez . More information is also available at both Facebook sites for Charly and for Electric Storm. Charly is taking the band on tour to promote the album, playing initially in San Jose and then in Panama. His live performances are definitely worth checking out.
Posted by Jimmy Danger at 7:51 AM No comments: