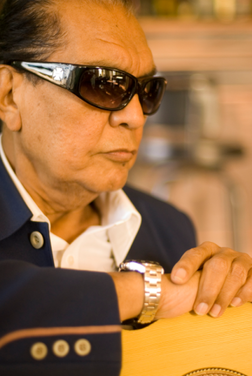 When asked to name a single artist who best exemplifies traditional Costa Rican music, most people will answer, “Ray Tico”. Born Ramon Jacinto Herrera in Limon, Costa Rica in 1928, Ray received his first guitar at the age of seven. Later, he worked as a fisherman in Colombia, where he launched his career as a professional musician. After moving to Cuba in 1953, he was dubbed Ray Tico, a stage nickname that stayed with him throughout the decades. And it was in Cuba in 1956 that he penned the bolero “Eso Es Imposible,” easily the most popular of the fifty-plus songs he wrote. With this newfound notoriety, Ray relocated to the United States, performing often at the Waldorf Astoria in New York City and spending considerable time in Hollywood. He was known as something of a Latin playboy, seen often in Las Vegas with members of the Rat Pack - international stars Frank Sinatra and Sammy Davis, Jr. In 1969, Ray Tico returned to Costa Rica, the hometown boy back from conquering America and putting Costa Rican music and culture on the world map. He was forty-one years old. His unique style of playing his guitar, which included using it as a percussion instrument during performances, became one of his trademarks. 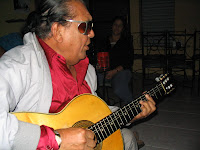 Ray Tico spent the following thirty-eight years writing songs and performing them virtually everywhere and anywhere, including presidential inaugurations in Costa Rica, and basically doing all the things that gained him word-of-mouth legacy. Recently in San Jose, Papaya Music celebrated eighty years of Ray Tico, with Sr. Jacinto performing live with Editus and various members of Malpais, among other notable Costa Rican musicians. Earlier this year, Papaya released “Solo Para Recordar”, a CD of Ray performing a collection of his classic songs.
Ray Tico passed away at the age of 79 on August 17 in his home in Limon, embracing his guitar. He will be sorely missed. And he will be happily remembered.
All comments concerning this article are gladly welcomed.
Posted by Jimmy Danger at 1:33 PM No comments: 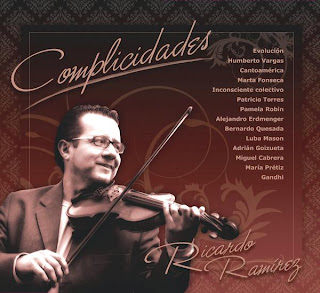 Eric Clapton once said, “I think of guitar playing as accompaniment. Anything beyond that gets gimmicky”. Apparently, violinist Ricardo Ramirez agrees with Clapton. A member of the Costa Rican Grammy award winning band Editus, Ramirez recently released his first solo endeavor, and I really like the concept of the album. Sr. Ramirez invited fourteen Central American singer/songwriters to bring one of their previously recorded works into the studio, to allow them to experiment with their vocal arrangements. And Ramirez takes care of the rest, the accompaniment. Hence, the title: “Complicidades”.
Ricardo’s selection of “accomplices” on the album is a nice vehicle to represent the vast musical styles currently blossoming in Latin America. The CD opens with a song by Evolucion and closes with a number by Ghandi, two of Costa Rica’s most popular rock bands. Between these two “bookends”, the album is spiced with a potpourri of musical flavors. Noted Calypsonian Manuel Monestel checks in with a new version of one of his standards, “El Espejo”.  Alejandro Erdmenger, guitarist from the Guatemalan jazz/flamenco band Siroro offers his song “Tropico de Cancer”, while Argentinan transplant Adrian Goizueta puts a new spin on his previously recorded “La Adavina del Barrio”. And Patricio Torres contributes another take on his “Perfume de America”, which he normally plays with saxophone accompaniment. 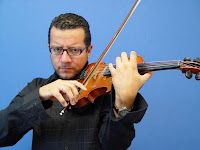 Notably, Ramirez has selected several women to bring their songs to the table as well. Uba Mason is the wife of Ruben Blades who has worked with Editus on many occasions. It’s a cool twist that Uba has chosen one of Blades’ songs, “The Calm Before the Storm”, which he co-wrote with Lou Reed. It is the single song on the disc that is not written by the singer and the only one sung in English. But then, Uba’s husband and Ramirez’ band share a history that includes an Emmy award, so I think she might have been allowed to modify the concept for the album a little. Besides, the result is a stellar version of the song.
Pamela Robin has opened for Editus on several of their national tours. Ricardo Ramirez must have seen and heard something he liked, because she also received an invitation to participate on this project, responding with “Los Dias”. And famed Costa Rican songstress Maria Pretiz renders an incredible new version of her “El Oficio de Esperar”.
Speaking of Editus, I think Ramirez used good judgment in not including the other two members of the band on this solo disc, if for no other reason than to display its uniqueness. Ramirez has been quoted as saying that this project is the most satisfying work he has done outside his twenty year relationship with Editus, which lends credence to this project’s complete separation from that band. It’s nice to see an artist develop a concept and take a chance with it by having the faith to plunge into it one hundred percent. It’s easy to feel this elation in the finished product of Ricardo Ramirez’ “Complicidades”.
In Playa Tamarindo, “Complicidades”, as well as all the Editus CDs are available exclusively at Jaime Peligro, where they will gladly sample the music for their customers.All comments concerning this article are welcome.

Posted by Jimmy Danger at 3:12 PM No comments:

Guillermo Anderson - Of Time and Tropics 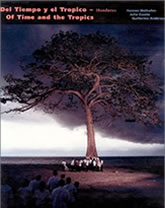 Of Time and Tropics

When famed Dutch photographer Hannes Walraffen decided to publish a book of his photography that depicts some of the history of Honduras, he recruited his friend, the Honduran novelist Julio Escoto, to supply the needed verbiage for the project. Escoto in turn suggested contacting the country’s premier musician, Guillermo Anderson, to write and record a CD with a complimentary theme to include in the book, creating a kind of multi-media package. 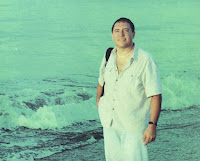 Max Urso is the founder of Costa Norte Records, the music label that puts out Anderson’s albums. Urso liked the idea of releasing Anderson’s CD separately, so he brought Guillermo back into the studios in La Ceiba and Tegucigalpa to add some new songs and tweak a few of the existing ones to create an album that would stand on its own as an independent, marketable entity. The final result is a seventeen song epic, spanning centuries of coastal culture, including the artist’s own memories. Appropriately, the eighty minute opus is entitled “Of Time and Tropics”.
In his past eight albums, Guillermo Anderson has pursued a unique theme on each disc, with a distinct sound for each venture. For his new CD, he draws from each of these influences, along with some new sounds as well. In the liner notes for the album, novelist Escoto speaks of the “richness of his (Anderson’s) musicality, based in local roots, but also his inconformity with what exists, the contemporary fresh air about it and the sweetness of his poetic vein”. The first track on the album, “Wooden Floor” is a perfect example of that sweetness, as Anderson conjures up his own childhood and adolescent memories that were witnessed by the floor in his house. How sweet is that?
Other songs visit the old banana railway, port bars and seafarers, fiestas and carnivals. Anderson handles these various topics with a milieu of musical styles, ranging from acoustic and Latin rock to the indigenous Garifuna, all with a Caribbean texture to them. I think that sometimes Anderson’s storytelling overshadows his incredible voice and very talented guitar work, not to mention his gift for meshing these three components into songs that are distinctly his and his alone. His new role as historian fits right into this menagerie, becoming another color of his tapestry.

Anderson is assisted throughout the album by long-time associate Eduardo “Guayo” Cedeno on electric and acoustic guitars, percussion and an instrument called the caramba, a type of bass using a gourd as the soundbox. As he has done on previous albums, Anderson also uses the chorus of schoolchildren from the Garifuna classrooms in Sambo Creek. Along with a host of other guests on saxophone, vocals, percussion and a variety of indigenous instruments, the end product stands as an homage to Honduran history and culture. Guillermo, in fact, has said that when writing the lyrics for this project, he did so “as if writing for a film”.
In Guanacaste, all Guillermo Anderson and all Costa Norte CDs are available exclusively at Jaime Peligro in Playa Tamarindo, where they will gladly sample the music for their customers. Any comments concerning this article are welcome.
Posted by Jimmy Danger at 12:30 PM No comments: