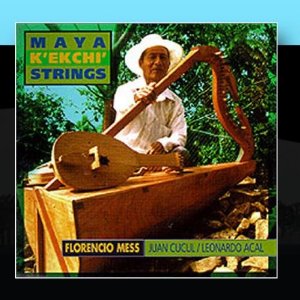 Music of the Mayas

Mention the Maya civilization and its culture and most people think of its amazing architecture and its feats in astronomy and mathematics. One rarely refers, however, to the music of this civilization that has survived for nearly three millennia. Yet, I can’t think of a civilization that does not have music as part of its culture as, of course, do the Maya. I became interested in Maya history about a dozen years ago, did a lot of homework and started visiting the ruins. So far, I’ve been to more than twenty different sites in the Yucatan Peninsula, Belize, Honduras and Guatemala. I can recall noticeably non-Hispanic music being played around some of the ruins I went to, specifically in Altun Ha and in Ceibal and Yaxchilan on the Usumacinta River in the southern area of the Maya world.

According to Maya folklore, all their songs were composed and named by Maya gods. The musical instruments that play these songs of the gods are stringed, resembling conventional harps, guitars and violins, with percussion as an accompaniment. The musicians are chosen as understudies at an early age and placed under the tutelage of resident musicians. In addition to being schooled as musicians, they are also taught how to craft their own instruments, using indigenous material, which can each take as much as four years.

Florencio Mess was born seventy-four years ago in San Pedro Colombia in the Toledo district of the southern Maya Rainforest in Belize. In his youth, he was selected to play the harp, the lead instrument for the local combo. Recently, Stonetree Records brought his group into the famed Radio Belize recording studio for a seven day spree of live recordings, direct to disc. The result is “Maya K’ekchi’ Strings”, a sampling of music that has been passed from generation to generation among the Mayas since before the time of Jesus. On the recording, each song has a brief verbal introduction. All the songs are instrumental, intended to be played at major events in the community and accompanied with dancing. The titles of the fourteen songs on this forty-five minute disc give insight to the rural themes of the songs. Four of the numbers are dedicated to local animals: the songs of the rooster and the bull, the vulture and the raccoon. Other titles include, “Itch Song” and, quite simply, “Small Sticks”. The music itself has a Middle Eastern sound to it, I think at least partially due to the beat.

Florencio Mess is one of the subjects of the film, “The Three Kings”, which the Belizean National Institute of Culture and History premiered recently in Belize City. The ninety minute documentary, capturing performances by three of the country’s legendary musicians, is slated to receive international distribution early next year. Mess has also participated in the eighth annual Rainforest World Music Festival in Sarawat, Malaysia and recently appeared at four shows for FolkFest in northern Italy. It’s nice to see Stonetree, among others, fulfill their mission statement of preserving historic Central American cultures, like the Mayas, even as they literally dissipate in front of our very eyes. “Maya K’ekchi’ Strings” and all Stonetree CDs are available at Jaime Peligro in Tamarindo.All comments concerning this article are gladly welcomed.

Posted by Jimmy Danger at 9:16 AM No comments: