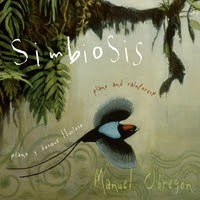 A Symbiotic Relationship
The seed of an idea can arrive at any time and sometimes that idea sprouts into a beautiful plant. Patricia Maynard is a musical producer and she is full of ideas. One that really germinated happened when some of her biologist friends were recording the sounds of the inhabitants of Monteverde National Park, strictly for wildlife identification purposes. It occurred to Patricia that the “soundtrack” to the park could be accompanied with music. And voila! The seed for the CD “Simbiosis” was hatched.
Initially, Ms. Maynard had envisioned the trio Editus, the Grammy Award winning instrumental band from Costa Rica, to provide the music. When that idea did not pan out, Patricia turned to the renowned pianist Manuel Obregon, who readily accepted. I cannot imagine the logistics of getting a baby grand piano into a dense jungle, but it did indeed get accomplished and beginning at three o’clock on a morning in 1999, Manuel Obregon sat down for a fourteen hour live recording session with his indigenous forest accompanists. The recording session began so early because this is when the wildlife is particularly vociferous and their response on this day was impressive.

The next step was for the recording engineer Alex Villegas and the sound editor Claudio Schifani to sculpt the sound (prune the plant) into a cohesive, palatable display of the musical interplay that transpired that day between a man, his piano and Nature. The result is nothing less than spectacular. In the final package, spanning nearly an hour, Manuel accompanies the long-tailed manakin (Chirosciphia linearis), the Resplendent Quetzal (Pharomacrus moccino), the Black-faced Solitaire (Myadestes melanops), a myriad of hummingbirds as well as the national bird of Costa Rica, the clay colored Thrush (Turdus grayi), known locally as the Yiguirro and selected as the national bird not for its appearance but for its beautiful, unique song which, according to local folklore, the thrush sings at the end of the dry season to call forth the rains. In addition, there are duets with Obregon’s incredible piano coupled with a league of Mantled Howler Monkeys (Alouatta palliata) with their unmistakable calls, as well as one with a chorus of Marine Toads (Bufo marinus) or Cane Toad, which can weigh more than 3 ½ lbs and has a voice to prove it. Manuel Obregon’s classical training and sense of improvisation shines throughout the entire album. The artwork by Mark Wainwright is clever and eye-catching, putting a slick ribbon on the package.

Patricia has since produced two more albums: “Monteverde Music Fest 2008”, which is a compilation of studio tracks from a variety groups who participated in this festival, and “Nattiva”, an album similar to “Simbiosis”, this time with recording engineer Alex Villegas teaming up with percussionist Carlos “Tapas” Vargas. Coincidentally, Villegas plays drums with pianist Manuel Obregon in the popular Costa Rican band Malpais. He is also the percussionist for the aforementioned Costa Rican trio Editus.

All three of Patricia Maynard’s CDs are available at Jaime Peligro bookstore, next to Supermercado 2001 in Playa Tamarindo, where they will gladly sample the music for their customers.All comments concerning this article are welcome.
Posted by Jimmy Danger at 3:49 PM No comments: 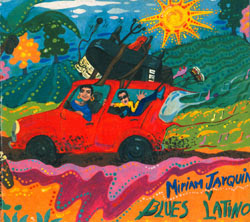 Prior to performing with Carole Camara, Miriam Jarquin embarked upon her career in 1977 with the Choir of Orquestra Sinfonica Nacional in San Jose. Four years later, in 1981, she became the lead singer for the rock band Chacal. In the nine year span between 1985 and 1994, she sang lead with Igni Ferroave, DCO and Route 66, and even did some work with Jazz Garbo. In 1991, she formed Academia de Musica Moderna with Carlos Pardo and Carlos Sanders. Yes, Miriam Jarquin has paid her dues and has the receipts to prove it.

Hector Murillo had studied at the Conservatorio de Castella, where he later became a music teacher. After a two year stint in Chicago, he returned to Costa Rica to work at Academia Moderna, where he would meet and work with the aforementioned Sra. Jarquin. After a short stint together in Jazz Garbo, the two decided to form their own band, veering in a different direction musically and calling the venture Blues Latino. Now, they have released a CD of their collective effort on the renowned Papaya label. They recruited Checko Davida to play saxophone and flute, Pepe Chacon to perform their percussive tasks and with Sr. Pardo on bass guitar, vocal accompaniment and Hector on keyboards. Joining them on seven of the thirteen original songs on background vocals is the acclaimed Marta Fonseca, who has also provided vocal tracks for Grammy winners Editus, among other bands.

The result, according to Murillo, is “born from a deep experience in classical music, the improvisation of modern jazz, the power of rock and the restlessness of our original music.” The album, dedicated to the memory of Miriam’s father, her musical inspiration, definitely lives up to its own hype. Sra. Jarquin has a voice as sweet and clean as any fruit from Costa Rica. Her torch songs are as warm and breathy as a local tropical breeze. And Murillo juxtaposes between piano and accordion to accommodate the mood of each particular song. Pardo’s bass riffs carry the rhythm with a solid beat that sticks every time.

The CD opens with “Blues de Hatillo” and “Capullito de Aleli”, two catchy, very danceable tunes. “Que Vamos a Hacer” is a dreamy number with lilty, electric piano meandering through it. The entire album alternates in this mode: between upbeat, finger-snapping songs to torchers guaranteed to burn the house and your heart down. And the band was smart enough to include three instrumental numbers in the collection, to add to the overall span of the album. This CD is a very impressive recording, especially considering it is their first.
Blues Latino is available at Jaime Peligro book stores in Playa Tamarindo, Nuevo Arenal and Quepos, where they will gladly sample the music for their customers.All comments concerning this article are welcome.
Posted by Jimmy Danger at 2:15 PM No comments: