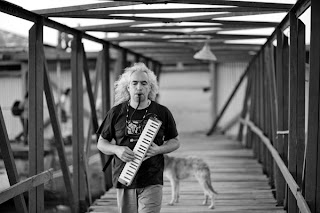 New Crest on the Infinite River

Manuel Obregon is a man of visions. He accomplishes his goals because he acts on his aspirations. To his credit, Obregon is one of the founders of Papaya Music, Costa Rica’s premiere music label. He is a member of the popular band Malpais, has a solo career as a pianist, is the founder of Orquestra de Papaya, and the list goes on and on. Manuel’s newest vision is called Rio Infinito, one of his most ambitious project to date. Thirty-four musicians from all over the Americas assembled last April for the Costa Rica International Arts Festival. It would be the first appearance by the Orquestra del Rio Infinito. Since then, the number has swelled to more than fifty performers.
Manuel Obregon sees music as a messenger with the capability of conveying individual and community needs. And he recognizes fresh waterways as critical to civilization since its dawn in the Americas: water to plant seeds for food and to transport those seeds, plants, and the things that consume them. It is no secret that the water that has formerly been in abundance here is literally evaporating. Obregon feels a responsibility to communicate this problem through musical events.

The La Plata Basin Tour 2009 will commence its monumental five thousand kilometer journey by boat on November 3, beginning at Corumba on the Pantanal River on the border between Brazil and Bolivia. With eight scheduled concerts in these two countries, Paraguay, Argentina and ultimately Montevideo, Uruguay on December 2, the Orquestra de Rio Infinito will invite local musicians to participate along the way. All the concerts will be free, including unscheduled stops at any port where they dock. They have received commitments from more than two hundred local musicians and the support of more than forty-five organizations, the strongest support coming from AVINA Foundation, who are dedicated to sustainable development in Latin America.

The Plata Basin is the fifth largest freshwater basin in the world. Literally millions of people depend on it for their lives. Manuel Obregon’s goal is to rejoin the marriage of water and culture. The response so far has been a very positive one, a union of musicians and teachers, artists and community leaders, environmental and social activists. The project has received a non-governmental status, which speaks volumes of its intentions, unbound by any political affiliation. The travelling band is a mix of musicians from all over the Americas: besides Sr. Obregon, musicologist Manuel Monestel and the Caribbean vocalists The Tucker Sisters are Costa Rican. The United States is ably represented by New Orleans violinist Nancy Buchan and Argentinan rock star and producer Leon Greco will be participating. Belizean punta rocker Mohobub Flores will also be there, along with Nicaraguan marimba players, Salvadoran bassists, Guatemalan percussionists, Panamanian guitarists, Peruvian flautists and a plethora of other players. The coordination and communication end of the project is a massive team in itself, with Daniel Aisemberg at the helm, accompanied primarily by Malpais member Jaime Gamboa and the lovely Julia Ardon.
Manuel Obregon refers to the project as an “orchestrated journey”. I hope it is just the start of a pleasant, successful one.
For more information, visit their website at: www.rioinfinito.com  All comments concerning this article are welcome.
Posted by Jimmy Danger at 9:19 AM No comments: 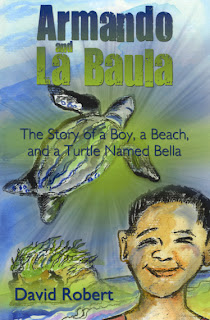 Armando is a young Tico boy who has lived his entire nine years with his family, just a stones-throw from Playa Real on the Pacific Ocean in Guanacaste, Costa Rica. He’s a smart kid with an active curiosity and Playa Real has continually offered him an abundance of different ways to explore and learn. Upon his request, Armando’s father allows him to spend the night alone on the beach on the evening of his ninth birthday because Armando wants to witness the phenomena of the Baula turtles coming ashore to lay their eggs. What transpires on that night has a huge impact on Armando: he does, indeed, see a Baula lay her eggs. In fact, the turtle introduces herself (Yes! She speaks!) as “Annabella”, or Bella for short, and has quite a story to tell the impressionable Armando.
This story is the premise of “Armando and La Baula”, the new, self-published book by David Robert. The story line moves right along, guaranteeing to keep young readers’ interest. There are more than a few good lessons concerning ecology, honesty, the value of a promise along the way, making it well worth it for the parents to read along with their children. Or even to read it alone for their own good: there is information in the book about both the life cycle of the Baula turtle and some of the species-threatening problems they are currently experiencing of which I was not aware. The chapters have been separated by the wonderful watercolor illustrations of Ellie Cox, helping the young reader to visualize Armando and his surroundings through the various phases of his adventure. It is a story that succeeds on a few different levels at being worthy of any young reader’s collection. Along the way, there are wonderful geographic descriptions and folkloric stories, all playing a part in the story line. The plight of the Baula turtle and many other species of Costa Rican wildlife is not a new development. But teaching people at an early age about it seems like a positive step to help come up with a solution. And David Robert’s book certainly makes the message easily digestible for a new generation. In fact, the story points toward a few viable answers and alternatives, with the potential for the young reader to become his parents’ teacher.
Armando and La Baula is available at Jaime Peligro bookstores in Playa Tamarindo, Quepos and Nuevo Arenal or can be ordered at: jaimepeligro123@hotmail.com
All commetns concerning this article are gladly welcomed.
Posted by Jimmy Danger at 1:51 PM No comments: