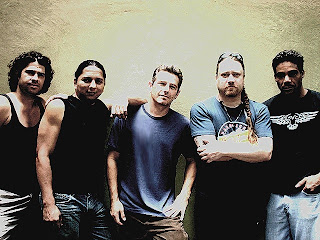 For centuries, the leatherback turtles have called Playa Tamarindo one of their nesting spots. And for more than a decade, so has the rock band known as The Leatherbacks. It’s hard to live in Tamarindo and not know who this band is. They have established themselves as a hard-working group, playing regularly at open mike night on Tuesday nights at Pasatiempo Hotel. Their exuberance onstage is infectious. It is obvious that these guys genuinely enjoy playing together and in paying their dues over the years, they have gotten very tight together.
For the past few years, one of the band’s two guitarists, Canadian born Brian Burback, has been writing and recording songs for a solo album, a kind of side venture. Or so he believed. As it turned out, Brian was simply developing his contribution for the much-anticipated debut album by The Leatherbacks. I recently had a chance to listen to this collaboration and it’s very, very good. The first thing that struck me was that this album is truly a joint effort, with these guys’ experience and comfort with each other shining through. Brian likened it to different threads in a tapestry, and he was quick to point out that while the songs were written be him and Nick D’Amico, the other guitar player/vocalist in the band, that the end result was the woven cloth, not a group of strings. Of the nine original songs that comprise the album, five were written by Nick and four by Brian. But that is where the sole ownership ends. Just listening to percussionists Roy Fonseca and Jose Canales’ steady backbeats are true testament that these guys are five fingers of the hand known as The Leatherbacks. And holding up the steady bottom on each song is the able bassist, Pedro Golobios.

The album kicks off with “I Know”, a good intro song and segues into the rest of the album. The whole CD of songs operates well as a unit, with various standout songs. I think “Better Be Gone” has the catchiest, foot-tapping hooks. I asked Nick about his guitar influences and he acknowledged that Carlos Santana was on that list, along with Clapton, Hendrix, “and about a million others”. I asked both guitarists about songwriting and they both told me that while there was no single formula, usually the tune comes together first, with the words forming their way around the music.
Deciding to simply title their first album “The Leatherbacks” is, I think, yet another indication of how these guys operate as a unit. The band plans on an early January release, so by the time you are reading this, the CD should be coming out soon. The entire album was recorded at Nick’s place, Casa Palmas, with the band doing all the recording, engineering and mastering themselves. “We had to get the sound straight from the amps to the soundboard,” Nick explained, “We wanted it to sound like a good live recording”. And it does. It’s got a good clean sound, without sounding like a sterile, digital recording.
The band is planning to play live with the Costa Rica National Philharmonic in June. It’s a big opportunity for the band and a big challenge as well: one I think the boys are up for. Their CD is available at Jaime Peligro book store in Playa Tamarindo, where the customer can sample the music.All comments concerning this article are gladly welcome.
Posted by Jimmy Danger at 9:26 AM No comments: