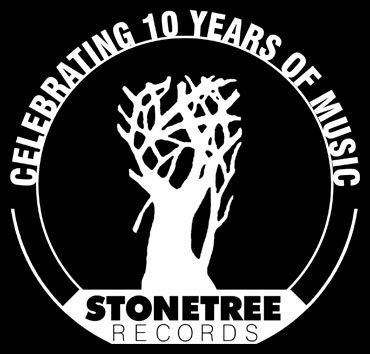 Ivan Duran got his first guitar when he was fourteen years old and living in Belize. Within a relatively short amount of time, he had also called Mexico, Spain and Cuba home. Then, in 1995, he returned to Belize with one project in mind: to build a quality recording studio, Stonetree Records, in his home town of Benque Viejo, near the Guatemala border. In fact, he told me in a recent interview that the recording studio “is on the same street where I used to play futbol when I was growing up”.
In order to pursue his dream, Ivan sold most of his musical instruments to generate cash flow. But he kept his first guitar, which, he told me, “plays a part in every album”. It took about two years to get the studio up and running. During that time, Sr. Duran played in a project called Free Access. The group had one concert and recorded one album that provided “an unforgettable experience for all those involved”.
Stonetree recently celebrated their tenth anniversary. Looking back, the results have been nothing less than fantastic. The studio has produced nearly thirty albums of music that embrace a variety of cultures, including Garifuna, Creole, Maya and Mestizo. They have been recognized as archivists of historic music while at the same time pursuing modern trends in world music. Ivan has attended WOMEX (World-Wide Music Expo) every year since its inception in 1997, where he has “developed many friendships with people who share the same passion for world music”. In fact, when Jacob Edgar left Putumayo Records to launch the Cumbancha label, he contacted Duran, according to Ivan, “to see what was in the works at the Stonetree lab”. The initial result was the acclaimed Watina, an infectious CD of Garifuna music. In fact, Jacob agrees with the stories of Duran being a perfectionist. “Ivan has an incredible ear for detail,” he told me recently, “and he keeps working on songs over and over again until they are exactly how he thinks they should be”. And Ivan’s perfectionist’s touch can be heard in the diverse Stonetree recordings, such as Leroy Young’s Dub Poetry, Wilfred Peter’s recordings of Belizean Creole, called Brukdown, Andy Palacio’s first CDs and Maya Collection of Florencio Mess.
Ivan and Stonetree have also worked with the Garifuna Women’s Project for nearly ten years, recording more than one hundred songs in the Garifuna language with more than fifty women participating. Upcoming projects for Duran include two more Garifuna albums with Cumbancha, one being the aforementioned Garifuna Women Project, backed by the musicians who appeared on the Watina CD. Another recording in the works is by Honduran Paranda star Aurelio Martinez.
Ivan Duran told me that the name for the studio, “just came to me. It was more of a feeling: stone representing the past and our cultural heritage, and a tree that is alive and growing now”. They have recently released “From Bakabush”, a compilation of songs from their catalogue spanning the last decade. It’s a great introduction to the label, including songs from all the artists mentioned earlier in this article.
It seems that Stonetree has lived up to the concepts behind its name.

Stonetree CDs are available in Costa Rica exclusively at Jaime Peligro in Playa Tamarindo, Tilaran and Quepos.
Posted by Jimmy Danger at 4:52 PM No comments: 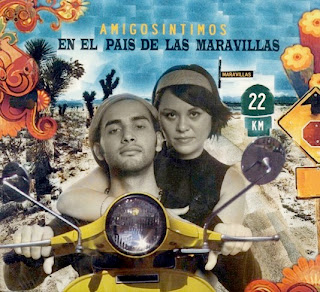 When Alice stepped through the looking glass, one of her first observations was that “things are not what they seem to be”. Lewis Carroll’s fairytale was written as a double-edged sword: a bright and cheery surface story, with an underlying cynical twin meaning. The rock duo who call themselves Amigosintimos have taken this theme and extrapolated on it with their debut CD, “En el Pais de las Maravillas”. There are direct references to Carroll’s work, including a song titled “Alicia” and a quote from Edgar Allen Poe in the lyric book which is included in the CD package.

Salvadoran Keren Mizrahl and Costa Rican Marco Arias met in 2002 and started making music together less than two years later. The concept for this disc has been evolving since then. The music is a collaboration between the two, with Keren writing most of the lyrics, singing lead and back-up vocals, and playing piano and acoustic rhythm guitar. Marco handles most of the music composition and guitar work, as well as some piano and vocals on the project. The songs are playful and bouncy, with bright, lilty vocal harmonies. The duo is ably assisted by producer Edu’  Olive’ on Fender Rhodes and Hammond organs, lending a circus/fantasy motif, which is depicted in the album artwork as well.

The irony lies between this Twenty-First Century Pop music on the surface and the serious political and social issues addressed in the content of the lyrics. The music certainly makes the message more digestible, especially in the songs “Amnesia” and “Voz de Guerra”. It also creates the possibility of a broader audience, verified by the album’s huge radio support from both 94.7 and Radio U. Not unlike the hippie movement forty years ago, some of the main issues center on loving more and shedding the warm coat of apathy. The sentiment is genuine and the music is infectious. “We’re not considered politically correct,” muses Arias. 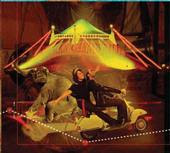 An incredible job was accomplished on the slick mixing and mastering by two-time Grammy (Ruben Blades, “Tiempo”) recipient Oscar Marin. It wouldn’t surprise me if the Beatle’s “Sgt. Pepper’s Lonely Hearts Club Band” was a major influence on the production of this LP. Studio guitar ace Bernal Villegas is all over the CD, playing on nearly every song. Even Hector Murillo, from Blues Latino, shows up for a cameo accordion appearance on one song. It’s an impressive legion of peripheral help, as we observe Amigosintimos “get by with a little help from their friends”.

The self-produced project was picked up for distribution by Papaya Music and given co-founder Manuel Obregon’s stamp of approval with a nice quote on the back of the jacket. The packaging is pure Papayan, too: nice, bright inks for the sleeves, an extensive booklet and a fold-out, eco-friendly jacket. The label has already backed a live promotional push for the band and the unveiling of its new CD. And given Papaya’s success and approval ratings, we should be hearing a lot more from Amigosintimos in the future and on the radio.

In Playa Tamarindo, Tilaran and Quepos, Amigosintimos is available exclusively at Jaime Peligro bookstores, where they will gladly sample the music for their customers.All comments concerning this article are welcome.
Posted by Jimmy Danger at 1:29 PM No comments: 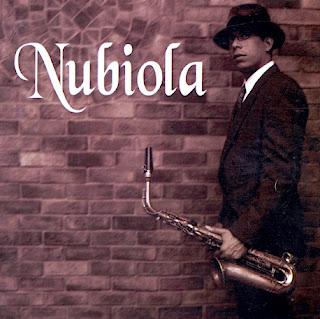 Some musicians have a sixth sense about where and when to be in a certain vicinity. This was definitely true about the time and place I grew up, as hip, young musicians from all over flocked to the San Francisco area to become entrenched in the Summer of Love. Similarly, in Costa Rica, there currently appears to be the genesis of a jazz movement. In fact, Papaya Music, the country’s major independent label, is now planning to release a compilation CD of modern, budding jazz bands from the area, similar in concept to the “Costa Rica Reggae Nights” disc they produced a few years ago.

Luis Nubiola started playing saxophone at the tender age of six in his hometown of Havana, Cuba. As he grew up, he was a member of several jazz bands there. He told me that one of his most memorable encounters during that time was when he jammed with Winton Marsalis. To be sure, Luis could have enjoyed a musical career in Cuba. But Costa Rica beckoned and he responded, moving here in 2004. Initially, he took session work for established acts, such as Walter Flores, Miriam Jarquin and Luis Monge. In the meantime, his Cuban jazz trio established a reputation in the club scene in San Jose and San Pedro.

The result of all this hard work is beginning to blossom. Recently, Nubiola released their first, self-titled CD, in tandem with Costa Rica’s first-ever jazz DVD, recorded at the popular Jazz Café in San Jose, a sure sign of Nubiola’s success at putting their act on the map. The CD was recorded in a single day, using the trio of Luis Nubiola on alto sax, Nelson Segura on a baby bass, Raul Diaz on drums and the assistance of Luis Naranjo on piano for a single composition. The seven-song CD starts off with a tribute to New Orleans and its longtime jazz heritage, with the second tribute on the disc proving to be a fusion of Latin and Afro-Cuban jazz. Actually, the entire CD reflects this new marriage of musical styles. There is also an instrumental nod to Cole Porter, a truly inspirational jazz musician whose style Nubiola honors with the song, “Simply to Cole”. But this CD is in no way a “tribute album”. I think Nubiola simply wants to recognize his roots and influences as he blazes his own trail. I also believe that this CD has succeeded in placing the band solidly in the Costa Rican jazz scene.

The DVD, “Live at the Jazz Café” is a nice snapshot of Nubiola in a distinct place and time. It was filmed with six video cameras, with the trio and Walter Flores on piano for the entire set. The film also features Robert Aguilar on vocals for one song and Alexi Del Valle playing the tumbadora on two numbers. All seven songs from the CD are performed, in addition to two more. I enjoy seeing the musicians taking their solos. The visuals seem to make it more personable for me. For example, when Diaz is taking a drum solo, he looks like he could be thinking about writing a letter to his mom: the drumming is second nature to him. This guy is what is referred to as a “musician’s musician”. The cameramen and post production are all to be commended, as the end result is nothing less than pristine.

In Guanacaste, the Nubiola CDs and DVDs are available exclusively at Jaime Peligro in Playa Tamarindo. All commetns concerning this article are gladly welcome.

Posted by Jimmy Danger at 1:32 PM No comments: