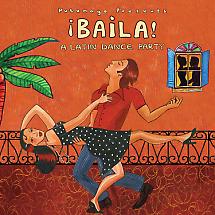 Since 1993, Putumayo Music has garnered a well-deserved reputation for having its thumb on the proverbial pulse of what is new, hip and coming down the pike of World Music. Their method is simple: once they have ascertained a “new sound”, they find a cross-smattering of bands from different locations around the globe, pitch the project to each of them, and then get them signed onto the project. Next, they all agree on their individual songs that are suitable for the band and the situation, and, when necessary, reserve studio time at the nearest sound lab to lay down the tracks for each artist’s representation on the compilation disc. After that, there is only the packaging (i.e., artwork, descriptions of each song and individual artist, photos, etc.), and the publicity and distribution in a variety of languages to convince the prospective customer to purchase their final product.
And that’s all there is to it, really …

Proving once again that they have designed and carved their own niche in the music industry, Putumayo recently released “Baila! A Latin Dance Part”, an eleven song, forty-two minute compilation of very danceable Latin tunes, ranging from salsa to cumbia to timba and beyond. The disc kicks off with “Mua Mua Mua” by Raul Paz, a Cuban musician who moved to Paris in 1997. The song is in collaboration with Euro dance producer Danya Vodovoz and Ferry Ultra and really gets the party jumping. Next are the Africano All-Stars with “san Fo”, where salsa meets the African beat, with foot-tapping results. Then it’s Bogata, Colombia based La-33 and “Que Rico Boogaloo”, a song done in retro 60s style, with an alternating salsa and R&B twist. Also included in this set is “Escucha el Ritmo” by The Spanish Harlem Orquestra, featuring legendary pianist Oscar Hernandez on this mid-tempo cha cha cha. “Hoah” finds Calle Real shifting between a contemporary timba style and classic salsa tempo. Anda Yerba Buena, based in New York City, serves up “El Burrito”, laced in classic cumbia and infused with elements of straight rock.

Whew! If that doesn’t get you on the dance floor, nothing ever will! The CD comes with a booklet with liner notes in Spanish, French and English. As with all Putumayo CDs, a portion of the proceeds from this disc is donated to children in Colombia who are victims of landmines. Baila! is available at the Jaime Peligro book stores in Playa Tamarindo, Quepos and Nuevo Arenal, where they will sample the music for their customers. All comments concerning this article are gladly welcomed.
Posted by Jimmy Danger at 12:17 PM No comments: