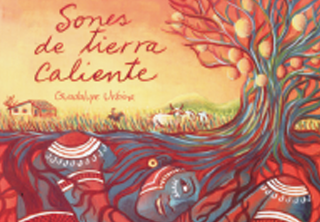 Born the youngest of ten children in Sardinal, Guanacaste, Guadalupe Urbina demonstrated her interest in folkloric music at a very early age. She sings with passion, veracity, capriciousness and has an incredible range with her voice. She credits her mother as being her mentor and biggest fan as well. Ms. Urbina received her deserved recognition in 1987, when she was invited to participate in the Latin American Music Festival in The Netherlands. From that performance, she was asked to perform at the 1988 Amnesty International Festival in San Jose, along with the likes of Bruce Springsteen, Tracy Chapman, Sting and Peter Gabriel.
Guadalupe has recently released “Sones de Tierra Caliente”, a compilation of sixteen regional songs that have been passed from countless generation to generation. The songs are a mix of lullabies, fiesta songs, romantic songs, children’s songs and street songs, all stemming from the Costa Rica province of Guanacaste. They are so entrenched in time that the songwriters are unknown. She has travelled to an assortment of small villas to gather these songs, traveling west from Sardinal to Artola, Portegolpe and Brasilito, and then south to Santa Barbara, Talolingo, Nambi and Diria. Some of the songs are humorous and some romantic; some are both. Guadalupe credits each person who “donated” the various songs and they are each given the opportunity to introduce their contribution prior to the beginning of the song. Each song is described in its historical detail in an accompanying booklet, the lyrics are printed and the music transcribed. It is really an amazing accomplishment, a true labor of love by Ms. Urbina and all involved, including Luis Porras and Fidel Gamboa who helped score the songs.

The album opens with “El Pilon” and “La Zopilota” two songs about working under the hot sun in the finca, songs recanted by generations of workers in the fields and farmlands. “En Coche Va Una Nina” is nursery rhyme, as are “El Garrobo” and “Chinto Pinto”, sung with a cadence, to accompany hand games or skipping rope, and “Cancion de Cuna” is a lullaby. The remainder are songs of love and humor; sometimes both themes are combined. One of my favorites is “La Viuda Alegre”, sung as a traditional waltz.
Guadalupe gathered an impressive group of musicians to record this compilation. The versatile Ricardo Fonseca played guitar, bass, saxophone, marimba and mandolin and helped arrange the album. Warren Alani supplied nice piano accompaniment. Isaac Morero played various forms of percussion, while Veronica Zumbado played violin, Ivan Chinchilla the trombone and Carlos Valverde the tuba. The musical accompaniment rounds the songs out, makes them more palatable and credible as an historic part of Guanacaste culture. The wonderful, lush painting and graphics are by Mary Anne Ellis.
Truly, Guadalupe Uribe shines on this project; it is her baby. Her voice is expressive, dimensional. Her work here is obviously a labor of love and she is to be commended and thanked for her hard work. The CD is available at the Jaime Peligro book store in Playa Tamarindo.
Posted by Jimmy Danger at 9:16 AM No comments:

Norm Schriever used to live in Tamarindo. A couple of times, actually. I met him when he was here for a year, writing a traveler’s memoir, titled “Push-ups in the Prayer Room”, a collection of stories Norm had woven together about his travels around the world a decade earlier. It was also about a young man looking for a humanistic mission in life. I liked it, even gave it a favorable review in The Howler. The book has been put Norm on the map as a credible writer. It also had something of a cathartic effect on him, allowed him to leave something behind as a legacy, positive proof of his existence.
I know because I’ve just finished reading “South of Normal: My Year in Paradise”, Norm’s chronicle of living in Tamarindo for a year, with the three goals of composing his first book, getting physically and mentally healthy again and finding happiness. He was smart to keep notes during his stay here: “South” proves he is an accredited writer, not a one trick pony. I regard it as a handy guide for anyone wanting to pull up stakes, relocate and navigate in a new culture. Specifically, it’s a wonderful inside glimpse of life here in Tamarindo, complete with all our quirky customs and personalities. For this reason, it’s earned a place in my heart. But “South of Normal” also picks up where “Push-ups” left off, finding our writer at a crossroads in his life. He’s out of shape and completely dissatisfied in The States – the Rat Race was taking its toll. So he does what so many dream about but so few follow through on: he pulls the plug and free-falls into Central America, following his heart, not his brain, and writing his book, the one he had been postponing for ten years.
In the introduction, Schriever explains that he is a traveler. He is also an objective camera, but with compassion and a sense of humor. The opening of “South” is jarring. The writer has just returned to Costa Rica and heads to a prison outside Liberia to visit a gringo friend who is there for growing marihuana. It’s not pretty, but Norm is able to blend humor even into this bleak scenario. Throughout the book, Norm returns to visit his incarcerated friend and repeat his mantra about getting back into shape and making a mark in the world. It’s no surprise that he discovers a connection between his physical and mental states of depletion, as the two mend symbiotically.
And as Norm pursues his “metaphysical journey to consciousness”, it becomes apparent that in “South of Normal”, there is a sense of completion for the writer that began in “Push-ups”. He also has a blast with his sardonic wit, depicting life in a culture where logic often takes a back seat. His portrayals of local personalities are spot-on and hilarious, touching and human at the same time. There are many poignant interactions for Norm in this book, both with other people and by himself.
Norm spent a year in San Juan del Sur and The States writing “South of Normal”. So, what’s next for this established writer?  He told me he wants to find a little hut on some obscure beach in Southeast Asia and write a “small” book, perhaps about the plight of children in the Third World. There he goes, leaving his legacy again. I know he left one in Tamarindo. I hope he finds his hut.
You can find both of Norm’s books at his website: www.NormSchriever.com
Posted by Jimmy Danger at 10:58 AM No comments: