The recording label that coined the term “world music” has broken into the Young Listener audience and no, I’m not talking about competing with the Jonas Brothers. recently unveiled their first releases in their new “playground series” and they appear to be on the right track. Three of the first four titles have a Latin theme running through them that I could not help but notice. Here is a quick rundown of them.

Caribbean Playground kicks off with “Great Big Boat”, sung by an old acquaintance of mine, Taj Mahal. I’ve known Taj for more than twenty-five years and everything he records exudes his genuine exuberance in his work, this song included. Jamaica is represented by no less than three of the twelve songs on this album, including Desmond Dekker’s version of “Jamaica Farewell”; Trinidad and Haiti each check in with two regional numbers. And Jose Gonzales y Banda Criolla from turn in a great rendition of “Bomba Te Traigo Yo”. A perfect example of what a classy organization Putumayo is: 100% of their proceeds from sales of this CD will be contributed to the relief efforts in .
Latin Playground is a compilation of up-tempo songs for the kid in all of us. Omara Portuondo opens the set and sets the pace with “Guantanamera”. Other standouts include Cubanismo doing a foot-tapping, finger snapping, “Mardi Gras Mambo”, Terri Hendrix’ offering of “Lluvia de Estrellas” and legend Flaco Jimenez checking in with a truly memorable “De Bolon Pin Pon” on this  eleven song album featuring songs from nine different Latin American countries.
Sure to be an instant hit, with “Reggae Playground”, Putumayo received an incredible response from Jamaica’s surviving musical royalty with contributions from Toots and the Maytals (“Take Me Home Country Road”) and Rita Marley (“Haramble”) as well as a regal performance of the Beatle classic “Here Comes the Sun” done by The Burning Souls. It’s an impressive list of bona fide reggae masters whose contributions lend credence to ’s credibility on this project. But the disc is also a nice international compilation, including kiddie reggae ditties from Indonesian, French and Hawaiian performers.

All the Putumayo Playground CDs come with concise intros about the regions and cultures covered in each particular disc, a nice little historic blurb for the kids and their parents. The Latin Playground especially does a good job covering Latin Culture, concentrating on that culture’s history in The Americas. It should be noted as well that the emphasis of the music on all the discs is to have a good time, also highlighted in the notes which, as with all Putumayo productions, are in English, Spanish and French, as are all the lyric sheets and notes on each individual performer and their songs. And contributes a portion of each sale to their Foundation Cross-Cultural Initiative, which introduces children (and their families) to varied world cultures in positive and educationally stimulating channels, in an attempt to open doors of communication and to encourage peaceful relationships among peoples of all ages and backgrounds. As The Beatle song says, “A splendid time is guaranteed for all!”
Putumayo CDs are available at the Jaime Peligro book shops in Playa Tamarindo, Nuevo Arenal and Quepos, where they will gladly sample the music for their customers. All comments concerning this article are welcome.
Posted by Jimmy Danger at 11:34 AM No comments: 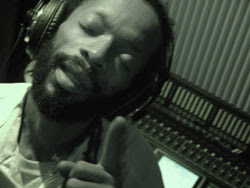 In Belize City, they have nicknamed the city prison “Rasta Ramada”. Leroy Young did a couple stints there, for stealing cars and then again for selling drugs. Born in 1967, Young grew up not just in the ghetto in Belize City, but in the toughest area, called Majestic Alley. Life’s full of ironies, right? After two attempted suicides and watching his best friend die in his arms from five bullet wounds because of a cassette tape, Leroy went through rehab and started washing cars in front of the BC Radisson. 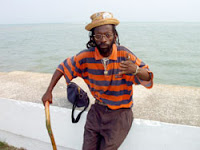 After high school and before his “rocky times”, Young had performed in Fresh Breeze, one of the first rap groups in Belize. And, luckily, he had started writing down his poetry. He began reciting his prose during and between car washing jobs. Eventually, Channel 7, an independent TV station in BC, gave him a job doing a ninety-second “wrap” of the evening news at the end of the program. As a result of this job, Leroy had two small books of poetry published and, more importantly, caught the attention of Ivan Duran, the president of Stonetree Records, the major recording label in Belize. Duran immediately booked recording time for Leroy Young and went into the studio with him, to lay down music tracks that complimented his prose style, called “dub poetry”. Duran would later proclaim the result “one of the most satisfying recording experiences I have ever had”. And rightfully so, since Duran plays a variety of musical instruments on every one of the sixteen tracks on the CD, titled, “Just Like That…”

The music is infectious, drawing from styles as diverse as Garifuna, Creole, Ska and African percussions. Duran even plays a little Maya K’eckchi’ guitar on a few of the songs. But it is Leroy Young’s album and it is his words and voice that take center stage on the CD. A follower of Jah, Young is a Rastafari, albeit an unconventional one, if such a thing exists. His songs deal with corruption and love, police brutality and family values, poverty and the purity of the soul. I would call it free association humor, with a bite. The whole package reminds me, more than anything else, of the beatnik scene of the Fifties and early Sixties. I’m not quite that old, but I caught the tail end of the generation that influenced mine and I think Leroy Young would have fit in quite well at Lawrence Ferlinghetti’s City Lights Bookstore in San Francisco.

The music slithers and meanders as Leroy scats and moans, free-associating on the way, at times overlaid with some interesting dubbed recordings. He jibes with the musicians on “Time” and poses serious questions about racial inequality on “Black and White”, noting that, “the deadliest weapon is the mind of the oppressed…” The album closes out with a very tongue-in-cheek, mock samba called, “Que Sera Sera”. The CD itself is enhanced with all kinds of goodies when played on a computer, including a bonus song that utilizes television news snippets and marimba in a sobering duet. To be sure, it’s not the kind of album that will get a lot of radio airplay outside Central America.

In Guanacaste, Leroy Young and all Stonetree CDs are available exclusively at Jaime Peligro in Playa Tamarindo, where they will gladly sample the music for their customers. All commetns concerning this article are welcome.

Posted by Jimmy Danger at 12:25 PM No comments: