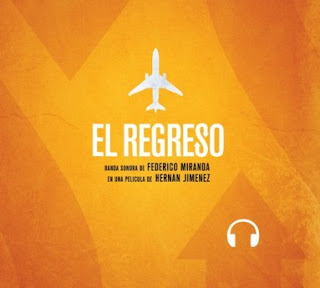 Writing a soundtrack is tricky business. The music needs to compliment the action and images of the movie of the film without being pervasive. It needs to follow the storyline so in this way it is almost like an assignment. And all good musicians want to put their own personal stamp on their music, so it needs to fall into the category of artistic expression as well: no musician wants their work to become wallpaper. This article is a review of the soundtrack of the new Costa Rica movie “El Regreso”; it is not a review of the film, which is wildly popular right now.
Federico Miranda picked up his first guitar with serious intentions at the age of twelve and taught himself to play. In 1993, he formed the popular Costa Rican rock band Gandhi, one of the first of this genre in this country. They have since released four albums and in 2005, Miranda also teamed up with pianist Walter Flores to work on the Baula Project, a fusion quartet who dedicated this album to the preservation of the leatherback turtle.
Moving in a new artistic direction, Federico scored the music for this soundtrack, then brought together ten musicians to begin recording it under the name Banda Sonora. Sr. Miranda plays acoustic and electric guitars on the soundtrack, as well as programmed keyboards. The band consists of Guier Abel on bass guitar, piano, the two percussionists Juan Carlos Pardo and Ale Fernandez, violinists Caterina Tellini and Ingrid Solano, Ricardo Ramirez playing viola and Marianela Lamb on cello, making up the string section, along with Jhonathan Mena Jimenez on flute and Jorge Rodriguez Herrera, contributing the horn section. I should point out that six of the twenty-three songs were contributions from six other Costa Rican bands, including Calavera y la Canalla with “Solo Conmigo” from their very popular new album. So, the soundtrack really is an extensive team effort. But the album belongs to Miranda, whose acoustic guitar works is showcased on the gentler numbers on the disc, such as the opening cut, “Chepe Centro” as well as on a variety of other musical vignettes throughout the CD. He worked for hours with filmmaker Hernan Jimenez discussing various scenes and plots of the film before even a single note had been written. The music seems to alternate between soft and up-tempo, giving a kind of pulse to the album and becoming one of the fibers that is the tapestry of “El Regreso”.
Other standout songs on the album include Son de Tikizia performing the Walter Flores composition “Jugaste con mi Destino” and the title song, “El Regreso”. I also really liked the two bonus tracks at the end of the disc.

It is no surprise that Papaya Music is distributing the CD, as one of their goals is to display to the world the great array of Costa Rican music. This CD, containing more than one hour of variety of Costa Rican music, fits right into that philosophy and is an excellent addition to anyone’s music collection.In Playa Tamarindo, it is available exclusively at Jaime Peligro book store, where they will sample the music for their customers.
All comments concerning this article are gladly welcome.
Posted by Jimmy Danger at 7:38 AM No comments: 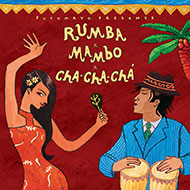 Infectious Music From a Small Island

In celebration of Cuba’s musical contribution to world music, Putumayo Music has released “Rumba, Mambo and Cha Cha Cha”, a ten song compilation by musical acts from all over the globe. Kicking off the set is “Guajira and Chachacha” by the French band Conjunto Massalia. Founded in 1990, the group has released four successful albums, the most recent being “Division”, where this snappy chacha first appeared. Who said the French can’t dance? The second number is “Potpourri de Chacha” by the Cubano sextet Tradicula. The group’s leader, Pedro Vargas, has worked to present son music with a modern twist and this lively medley-inspired song does just that.
Julio “Fruko” Estrada started his music career in 1968 at the tender age of fifteen, singing for the popular Colombian band Los Corraleros. That same year, the group visited New York City, where Fruko witnessed first hand that city’s burgeoning salsa scene. Inspired, he founded Fruko y Sus Tesos in 1970. The band has recorded six albums and is referred by many Colombians as the country’s leading export. On this compilation, they offer their rendition of the popular “Mambo #5”, originally recorded by Perez Prado in the early Fifties and later rejuvenated by Lou Bega. Fruko has given it new life, once again, with his trademark delivery.
Truly indicative of the global spectrum Cuban music has embraced is the song “Esperanza”, the entry by an eleven piece Scottish band called Salsa Celtica. The band originated in Edinburgh with the idea of fusing classical music with jazz and salsa to create their own genre with a marriage of musical styles. They took a gamble with this project but he result speaks for itself in its lively, unique style.
Other standouts on this compilation disc include Grammy nominees Angel Melendez & the 911 Mambo Orchestra who hale from Chicago and have received an Indie Music Award for “Best Latin Album”. Their contribution to this CD, “Cereza Rosa” is an excellent vehicle for displaying their deep, brassy sound. In addition, Asere is a conglomerate of seven musicians who have played together for fifteen years and recorded four albums. “Oriente” is a toe-tapper, guaranteed to get you out of your chair. They are currently working on a project with legendary Billy Cobham, enough credence for anyone’s resume.
Orquesta la Moderna Tradicion assembled in the San Francisco Bay Area, where they play the night club circuit regularly. But the members are Texans, Venezuelans, Cubans, as well as Californians, all with a similar jazz/salsa passion. Their song “Mi Cha Cha Cha” pretty much speaks for itself. And the quirkiest delivery has been saved for last: Tres Muchachos & Companeros from St. Petersburg, Russia, performing “Pa’ Mantener Tradicion” from their premiere CD released last year, titled, ”Bombo Mambo”. Who could have ever guessed that these two worlds would intertwine? Fidel Castro must be having fits: he undoubtedly had been sure that his peoples’ communism would emanate from his tiny island to embrace and invigorate the world; instead, it is the music of Cuba that has sustained.
The CD is available at the Jaime Peligro book stores in Playa Tamarindo, Quepos and Nuevo Arenal, where they will sample the music for their customers. Any comments concerning this article are gladly welcomed.
Posted by Jimmy Danger at 8:50 AM No comments: