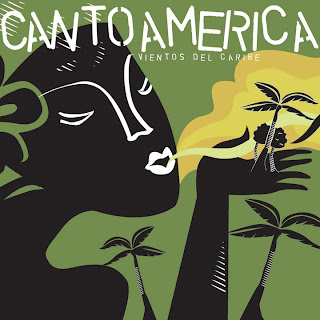 A Quarter Century of Cantoamerica

When a band has been together for as long as Cantoamerica has, its influence tends to stretch out and embrace a community much larger than just the guys in the group. Twenty-five years and twelve recordings into their collective career, that is exactly what has occurred with Cantoamerica. Fronted by musicologist Manuel Monestel, the band recently released the self-explanatory CD, “Cantoameric 25 Anos”, a live recording of some of the band’s most recognizable songs. On hand to partake in the celebration are a number of major players in the current Costa Rica music scene.

The band itself is comprised of Monestel on guitar and lead vocals, a horn section that includes two trombones and a flute, bass and keyboards, and three percussionists. One of these, Rafael Vargas, is the younger brother of Carlos “Tapas” Vargas, the drummer for both Malpais and Editus, two renowned Costa Rican bands. Not unlike the recent Cantoamerica show hosted by Night Life Tamarindo, the guys start off the CD with a nod to Manuel’s mentor, legendary Calypsonian, Walter Ferguson, singing “Cabin in the Water”. And just like that, the fun these guys generate at their live shows is immediately translated to the listener. The disc closes with “Carnaval Day”, also by Water Ferguson and “Next Creation” by Herbeth ‘Lenki’ Glinton, another cornerstone of Costa Rican Calypso music. These tributes to the forefathers of local Calypso music frame the CD very well. All the rest of the tunes on the disc are penned by Monestel.
Vocalist Maria Pretiz shows up to sing “Espejo” with the band, turning in a tasty vocal duet with Monestel on the ballad. Editus sits in with Cantoamerica for their rendition of “Seguira el Amor”, one of the more impressive numbers on this disc. The chorus, led by Elena Zuniga, lends itself well to the song, too. On “Oficio”, the band is ably accompanied by Amarillo, Cian y Magenta, who add their bent of “nu jazz” to the song. “Merry Woman” finds the Cantoamerica performing with Frutos de Acki, a Caribbean Costa Rican female vocal quartet.

Of course, Monestel’s longtime friend Manuel Obregon, the founder of Papaya Music, makes his contribution on piano all over the CD. His style is unmistakable and his ability to change stylistically between various songs is indicative of the entire gamut of Cantoamerica’s playbook. While the CD could be viewed a Cantoamerica as the house band for all their friends in the house, this really isn’t true. The guest appearances are nice and very complimentary, the music and the performances are unilaterally Cantoamerica’s. The enthusiastic crowd responses are a testament to the band’s legacy. It’s a little reminiscent of the latest Malpais live CD, “En Vivo” in that respect.
The encore cut is, appropriately, Manuel Monestel’s most popular song, “Give My People a Chance”. It is also obvious that the group is well rehearsed but they also leave enough room for improvisation, which, when done properly, makes for an enjoyable live performance. It was definitely done properly on this recording, which were taken from two live shows at Teatro Popular Melico Salazar in San Jose on October 21 & 22 last year. Monestel also produced the CD and oversaw the artistic direction. It’s definitely his baby and he should be very proud of it.
“Cantoamerica 25 Anos” is available at Jaime Peligro, where they will gladly sample the music for customers. Any comments concerning this article are welcome.
Posted by Jimmy Danger at 8:04 AM No comments:

Goizueta was born in Argentina but has spent more than half his life in Costa Rica and has a sizeable following in Western Europe. He has put out a plethora of albums with his band, Grupo Experimental. Adrian decided to release a solo project that, “speaks of the past with the sounds of the present”. To do so, he enlisted players from Nicaragua, El Salvador, Peru, Argentina, and Costa Rica, including violinist Ricardo Ramirez of Editus. To put the package together, Dutch producer Jos Haagman was brought on board. The final result, titled “Tangoizueta” proves that incorporating musicians from various cultures was not just a gesture. Goizueta wrote or co-wrote all the songs but plenty of room was given to all the participants, which is brought out by the slick production on this thirteen song, sixty-five minute disc.

The music comes across as a fusion of son, milongas, samba and a jazz influence, especially in the bass lines. One of the songs, “Tangouito Prohibito” has been included in another recent Papaya release, “Guanacaste al Atardecer”, which I thought was a nice marketing touch by the parent company. If I have one knock on the CD, it is that I thought some of the lettering was hard to read in the booklet included in the CD jacket.

One of the songs on “Tangoizueta” was co-written by Luis Enrique Mejira Godoy, whose own solo Papaya release, “Mis Boleros”, came out at the same time. Born outside Leon, Nicaragua in 1945, Mejira moved to Costa Rica after graduating high school. His father, Carlos, was a popular local musician who also built marimbas. Luis returned to Nicaragua in 1979 to participate in the Sandinista revolution there. With his brother Charles, he established the Nicaragua Company of Cultural Recordings, producing over one hundred discs. In 1999, he received an honorary doctorate from the Nicaragua government.

While Mejira also has many of his own albums under his belt, “Mis Boleros” is his first recording in more than ten years. He was recently quoted as saying, “The bolero is a mirror of all hearts, an inventory of sorrows and the melodies of the soul”. The CD is a project he has been working on for the past three years. He penned every song on the album, some of them as much as twenty years ago. All the songs are previously unreleased. Mejira dedicated the work to Ray Tico, a Costa Rican bolerista who recently passed away. Unlike Tico’s work, “Mis Boleros” has the full accompaniment of acoustic and electric piano and bass, second guitars and percussion and, at times, even strings, horns and woodwinds. The entire disc is a real tribute to Mejira’s versatility and attention to detail. I think it is safe to say that this project is a labor of compassion that comes through on every song.

The packaging for both CDs are purely Papayan, complete with booklets, perhaps demonstrating their passion for music as well. “Mis Boleros” and “Tangoizueta” have a limited pressing and distribution. In Guanacaste they are available only at Jaime Peligro in Tamarindo, where they will gladly sample the music for their customers. Any comments concerning this article are welcome.
Posted by Jimmy Danger at 9:21 AM No comments: