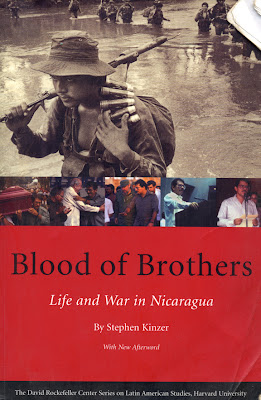 Nicaraguans are an enduring people. Their history is one of a proud, diverse people who have witnessed a lot of calamity and disaster in their country… and Stephen Kinzer has witnessed a lot of their recent history, first-hand. Kinzer started his career as an independent reporter in Central America in 1976 and continued until 1989. Initially, he found himself roaming from country to country, going wherever there was a hotspot or new scoop. However, he always found himself drawn to Nicaragua, finally returning and developing an earnest interest in its people. This passion led him to accepting a job with the Boston Globe, and on those merits, later with the New York Times, who awarded him a full-time position reporting exclusively in Nicaragua, with an office in Managua - the first of its kind for The Times.

Stephen Kinzer was there before the revolution, during the revolution, and after the revolution. His detailed chronology of this era has been published in, "Blood of Brothers, Life and War in Nicaragua". In his book, Kinzer delves into the history of Nicaragua to explain how the Somoza dictatorship fell apart as well as the impetus for the war that brought the revolutionary Sandinista government to power. He does a good job in remaining politically impartial while recognizing the Sandinista's strength as revolutionaries, their commitment to the people in ousting the Samoza regime, and their terrible ineptitude in governing a country. Likewise, Kinzer relays the earnest intentions of the Contras and the Catholic priests, their international infractions with the CIA and Honduras, and their killing of Ben Linder, an American volunteer whose crime was helping impoverished communities build small hydroelectric plants. However, it is impossible for the author not to be effected by the sight of so many non-military corpses. In a six-year span, thirty thousand Nicaraguans perished amidst their civil war (fifteen people every day for two thousand days). Most of the civilians were killed by their fellow countrymen, in what was perceived to be for the best of intentions.

Kinzer also did an exceptional job reporting on the plight of the indigenous peoples of the Caribbean; how they were transplanted and abused by both sides during this nearly decade-long confrontation, and how some tribes never recovered. The modern history of the indigenous peoples of the Americas has traditionally been swept under the carpet, but in ”Blood Brothers”, the author brought their story to the forefront. Commendably, he also did not hold back reporting on the deplorable, covert actions of the United States during their revolution, as well as their inhuman and bullying tactics. The CIA’s role came to light when Eugene Hasenfus, an independent contractor employed by the CIA to drop supplies to the contras, survived the crash of his C-123, which was shot out of the sky by a Sandinista patrol. Hesenfus’ testimony, along with the documents uncovered at the wreckage, confirmed covert CIA activities and proved that a portion of the profits from the sale of weaponry to Iran was funding the Contras. Unbelievably but truly, the U.S. was laundering money with sales to the Ayatollah Khomeni from missiles that he was secretly buying to fund their war against the Sandinistas. By the same token, Kinzer was quick to point out that the Sandinistas were not hesitant to seek help from North Korea and the PLO, two frightening bedmates.
Ultimately, it was Costa Rica's new president, Oscar Arias, who was instrumental in getting the opposing factions to sit down and hammer out an agreement, including an open election that led to Ortega's demise. Still, it will take decades for Nicaragua to recover. Stephen Kinzer's book is enlightening, revealing and non-partisan, making it a must-read for anyone interested in the modern history of Nicaragua.

All comments concerning this article are gladly welcomed.

Posted by Jimmy Danger at 2:28 PM No comments: