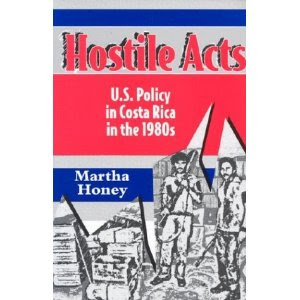 Writing about politics and the political arena can be a touchy subject. Too many times the author ends up preaching to the choir or simply alienating their curious reading audience. It does not often happen that a book can sway members of an opposite political faction or belief. This, however, seems to be the unique case with Martha Honey’s “Hostile Acts: U.S. Policy in Costa Rica in the 1980s”. Since its release, several of the main players berated in the book have changed their colors and revealed their true roles during this embarrassing chapter in the checkered history of the foreign policies of the United States of America.
But back to Martha’s book. Ms. Honey has combined extensive academic research with her own first-hand experiences as a journalist. Martha lived in Costa Rica from 1983 until 1991 with her husband Tony Avirgen, who is also a journalist as well as a cameraman. During those years, nearly a decade, Honey worked for the London Times, the New York Times, The Nation, NPR, ABC and BBC, impressive credentials, indeed. As a result of her endeavors, she was awarded the Pio Viquez National Award for journalism in 1989, presented to her by none other than Oscar Arias.
The U.S. involvement on the Contra debacle as they tried to stamp out the Sandinista revolution in Nicaragua during the collective terms of presidency of Ronald Reagan and George Bush, Sr. is no clandestine mystery. In fact, quite a few books have been written and published recently on that very subject. What makes “Hostile Acts” unique is that it is told from the Costa Rican viewpoint by someone who was actually there to witness it and, at least theoretically, impart impartial reporting on the subject.
Here in Guanacaste, a folkloric glow hangs around Ollie’s Point because this is where Ollie North, working as a CIA directive, used to slip into the country too illegally supply and aid the Contras with American clout and cash. It all sounds somewhat mach-romantic until, upon reading Martha’s book, the reader discovers how many people were shot or blown-up due to these actions. It’s also interesting to note that John Hull, an ex-pat who owned property in that vicinity at the time and was receiving ten thousand dollars a month (of U.S. taxpayers’ money, without their consent) and that he was picking upon another cool ten grand every time a cocaine delivery used the airstrip on his property built by the U.S., which was often and always under the watchful eye and consent of the covert CIA operatives. It wasn’t until after the publication of “Hostile Acts”, however, that Hull was brought to court and prosecuted for his actions during the Contra operations.
Oscar Arias comes out smelling like a rose in the book, although he is at times depicted as being contradictory and wishy-washy, a dreamer and an idealist. From my perspective, he was a little over-glorified by the author, making him appear as responsible as the Sandinistas for thwarting a U.S. coup in Nicaragua. Still, Ms. Honey has done her homework, as the nearly one hundred-fifty page appendix of her book exhibits. Through all that data, though, Martha Honey makes “Hostile Acts” a very digestible book for the average reader.
Posted by Jimmy Danger at 3:53 PM No comments: 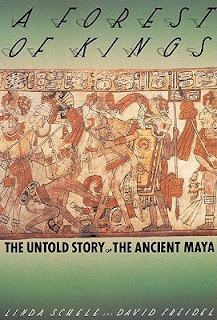 The recent publication of “A Forest of Kings” has shed new light on some of the mysteries surrounding the ancient Maya culture. The book is a collaboration between the two prestigious archeologists Linda Schele and David Freidel, who collectively have spent more than fifty years in Central America and Mexico excavating Maya ruins and deciphering their glyphs. For some time, archeologists have understood the Maya counting system, their adroit understanding of astrology and the systemic patterns of stars and planets, and some of their religious beliefs. A big question mark has been the explanation for the apparent collapse of the entire empire nearly five hundred years prior to Europeans arriving on the continent and what predicated the slow repopulation of their abandoned sites. And this is where Schele and Freidel come in. Linda spends most of her time in Guatemala and Honduras, while David generally concentrates on the Yucatan Peninsula and Quintana Roo in Mexico. Though the two rarely work side by side, it was through their sharing of information and comparing notes that most of the break-through occurred. And it was by translating several key verbs, understandably, that the actions of Mayas started making more sense. Truly, this work has the makings of a giant puzzle, much more real than any Dan Brown novel. It also has nothing to do with the 2012 Doomsayer’s predictions or some New Ager reading your Mayan Astrology. As an amateur student of the Maya civilization (I’ve visited twenty-two different sites), I take great offense with these pretenders when they sling the Maya moniker around to gain ambience or credibility.
With their new information, Schele and Freidel postulate that, ironically, success led to the Mayan civilization’s failure; that as sites became more populated, there was a need among the hierarchy to dispense power to maintain the population and try to defend against and/or conquer neighboring city-states. And kings lost their credibility among the masses as the voice of the gods through their lineage as they relinquished the reins. In addition, as the upper-middle class grew in each community, the concentration of population in the center of the community intensified. Originally, these sites had been chosen because they were fertile but as these richer areas became covered with temples and upper-end dwellings, farmers were pushed into the less fertile hills, which were soon depleted, their topsoil washed away in the rainy season. And so the cycle began and the kings’ credibility lessened even more. Prosperity, theoretically, bred an eventual defeat and evacuation of the sites.
It is amazing how the written language survived during this seemingly dead time because upon returning to their original sites, the Mayas continued to build and inscribe. Even more amazing is the hundreds of unexcavated sites the jungle still harbors, some small and some massive. It will take lifetimes to unearth these places, just as it took lifetimes to create them. “A Forest of Kings” is a useful book for readers interested in more than just a glimpse at the storied Maya civilization.
Posted by Jimmy Danger at 4:30 PM No comments:

Avelino Here, There and Everywhere

Fabio Avelino dos Santos was born in the small town of Limoeiro, near Recife, on the Atlantic coast of Brazil. He started playing guitar at the age of fifteen and began performing to audiences at the age of eighteen. He considers Brazilian musicians like Luis Gonzaga to be among his major musical influences, as well as the writer Paulo Coelho and The Beatles. Avelino had a big smile when he told me about the difficulty he had learning the Beatle song “Yesterday”, his eyes a little lost in memory. But then, Avelino smiles a lot.

Let’s fast forward now to 2012. Fabio has been living in Tamarindo for nearly eight years. When he arrived, he spoke only Portuguese and he now handles himself very well in Spanish, English, Italian and French. His musical influences have grown to become international as he continues to perform in this town and outlying areas that get visitors from all over the world. If you go out at night in Tamarindo, chances are good you have seen him perform: he could easily be the hardest working musician here. He told me (smiling, again) that during the high season, it is not unusual for him to perform as many as twelve shows in a week. He recounted to me a time he played in Pinilla at midday, then a sunset show at Playa del Coco and wrapped it up with a night show in Tamarindo, then singing to himself on his way home on his scooter, to keep from falling asleep. His shows are exuberant as his passion for playing can be magnetic, drawing the crowd into his always upbeat energy.
Fabio recently completed his new CD “Costa Rica Paraiso Tropical”. It was recorded live at a sunset show on June 10 of this year Langosta Beach Club. I believe it is one entire set, played consecutively from beginning to end, so it is an excellent representation of what to expect at one of Avelino’s shows. Fabio sings and plays guitar accompanied by local musician David Herzovich, who actually hales from Argentina. He plays a steady, anchored bass guitar, allowing Avelino to venture into his musical flights of fancy. As a duo, they call themselves Che Brasil. The twelve song set opens with a lively percussion and vocal intro, setting the tempo for the show. Avelino tracked and looped the basic percussion tracks and adds live percussion along the way. The music definitely has a Caribbean influence, as well as samba and bossa nova; it is very up-tempo, jubilant even. Standouts on the sixty minute disc include “Sina” and “Filhos de Gandhi”. My personal favorite is “Estrela Divina”, a song in which Fabio poetically describes an early evening star as a “descendent of the Big Bang”.
Avelino also told me he is working on new songs that will continue to incorporate Spanish, Portuguese and English in the same lyrics, a true musical marriage of cultures. The CD is available at any Avelino live show; finding a live Avelino performance should not be a problem at all in the Tamarindo area: he’s everywhere!
Posted by Jimmy Danger at 4:27 PM No comments: