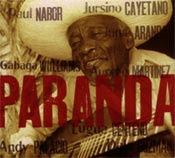 Nearly all music is a melting pot, a new image of its influences and predecessors. In Central America, Garifuna music is unique in that it is a blend of African and indigenous music without any influence from the European cultures that became dominant in all the Americas. The offspring of the indigenous Awarak tribe and African slaves who survived from two sinking slave ships, the Garifuna have always preferred an isolated existence. As these people enter the Twenty-first Century and near extinction, Ivan Duran and Stonetree Records in Belize have undergone painstaking labors to at least preserve the music by recording it. Likewise, a spin-off of Garifuna music came into existence around the middle of the seventeenth century when Spanish guitar and musical styles lent themselves as a variation on Garifuna music, and a style called Paranda was born.

Ever vigilant to preserve disappearing Central American musical genres, Stonetree has released a compilation CD called, quite simply, “Paranda”. The lineup of musicians is, in itself, a revealing portrayal of this fading musical style. Most of the performers on this disc are getting on in their years, with very few students left to carry the torch. Paul Nabor, who is featured several times on the Paranda disc, is a religious leader in Punta Gorda, the small village in Southern Belize where he resides. He is also seventy-two years old and the last living Parandero there. Garbaga Williams was exuberant about having his songs preserved. He explained that due to his arthritis he could no longer play guitar, that his friend Dale Guzman would play his songs. Since the recording of the CD, Garbaga has passed away. Tall and thin, Jursino Cayetano, 60, is one of ten children and the last living Parandero from Guatemala. And Junie Aranda, at the age of 57, is one of the youngest of the living Paranda legends. Aranda was born and raised in Dangriga, the largest Garifuna center in Belize. The last musician there to play Paranda music, he is teaching it to his son. And there is a new generation of Garifunas who are eager to learn the music. But the number of torchbearers keeps dwindling.

The music on the CD is the result of two years of research, traveling and recording on Duran’s part, to small Garifuna villages spread throughout Belize, Honduras and Guatemala. The percussion comes from handmade drums, shakers, turtle shells and conches with a definite, distinguishable West African style to it. As with traditional Garifuna lyrics, the subject matter of the songs deal with local events, from the death of an aging sister to, as Junie Aranda describes them, the “getting back songs”. When someone in Dangriga crosses his path, he writes a song about it. In no time, everyone in town hears about the neighbor who owes Junie money or a former employer who did him an injustice. The songs all have a very personal texture to them, especially the laments. You can almost hear Paranda singing its last breath. Hear it at Jaime Peligro book store in Playa Tamarindo. All comments concerning this article are gladly welcomed.
Posted by Jimmy Danger at 4:53 PM No comments: