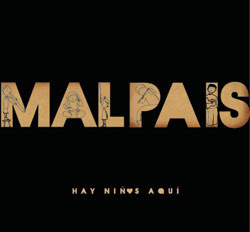 In a career that is approaching a decade, Malpais has become one of the most popular bands in Costa Rica. Their appeal, like the band, kept growing. And I think this is one thing that adds to their popularity: they continually expand the realm of their influences. Malpais has gained the affection of their continually growing audience because they never forgot their roots. Their songs are snapshots, histories, reflections and all human and tangible. The new album “Hay Niños Aqui” keeps them on both roads of staying grounded, while spreading out.
The project began when Jaime Gamboa began writing lyrics for his friends at Vision Mundial, who are celebrating their twenty-fifth anniversary of aiding the victims of poverty, especially children. He came to a juncture in his compositions: he and his brother, composer/guitarist Fidel Gamboa had written five songs and basically completed the initial goal for the project. Still, Jaime felt inspired by the families who strive to improve the lives of their children. In a short time, they had collaborated on five more songs and the project took on a new dimension.  When they took their work to the rest of the Malpais bandmembers, a twelfth song, “Rio Grande” was added and the fifth album (seventh, if like me, you include Tierra Seca and La Cancion de Adan) by Malpais was created.
The album begins with the title track, “Hay Niños Aqui”, and flows into the other four initial compositions. The songs are portraits, vignettes of young people in precarious situations, not of their own doing. I think it is appropriate that “Rio Grande”, the instrumental track, separates the first set of songs and the second group, not unlike an interlude. And Malpais sounds wonderful, a group of musicians very familiar and comfortable with each other. The violin playing of Ivan Rodriguez sounds like another voice and Manuel Obregon’s piano accompaniment is impeccable. For this album, they have insightfully added a children’s chorus, along with electric guitar accompaniment by Ricardo Alfaro on a few cuts.
Upon its release last month, Malpais announced that proceeds from the first two thousand CDs would be donated to Vision Mundial, who have aided in improving the lives of more than twelve thousand children throughout Costa Rica. It is a true demonstration of the band’s commitment not only raising public awareness of the situation with their album, along with being role models in doing something about it as well. They followed this announcement with an autograph campaign, the entire band present to sign copies of the album, inspiring their fans to help in the contribution, too.
Malpais has acquired a good reputation for giving back to the community. Radio Malpais is a good example of how they are trying to employ students while exposing new musical talent and providing entertainment to the public. They are also a band steeped in a kind of new folkloric storytelling. The message is clear in “Hay Niños Aqui”. It is a story that needs to be told and to be listened to.
All the Malpais CDs are available at the Jaime Peligro bookstores in Playa Tamarindo, Tilaran and Quepos, where they will gladly sample the music for their customers. All comments concerning this article are welcome.
Posted by Jimmy Danger at 6:41 AM No comments: