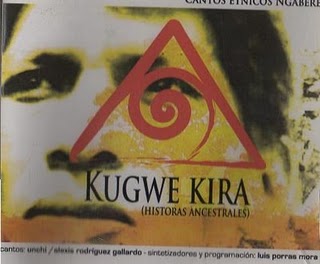 Costa Rica has been blessed with a plethora of regional music and musicians. Their sounds and talents are as varied as the different landscapes of this country. Recently, Tamarindo was rewarded with a live presentation of truly indigenous music in a concert by Unchi, of the Ngabe tribe residing in southwest Costa Rica. The concert, a benefit for CEPIA, was held at the Hotel Diria amphitheater, which, sadly, hosts far too few live shows.

Unchi lives in the Guaymi Reservation, near the town of Sanuito, north of Golfito. The women of the Ngabe people are easily identifiable on the streets of Sanuito, dressed in their brightly colored, festive, traditional attire. Unchi considers his mother to be his mentor, teaching him the ancestral history of his people, including their songs, in their indigenous language, called Ngabe. This ritual of passing of information from generation to generation is a tradition that has survived in areas like Guaymi in Costa Rica for literally thousands of years.

There are actually only three Guaymi reservations that still exist: two in Costa Rica and one in northwest Panama. Each time a song is passed to a new generation, it is adapted with new perspectives, new voices. Traditionally, one song exists for each event of the day. The storyteller sits in the center of the local people, reciting the story with a traditional fan propelling the words. The singer, not unlike a town cryer, delivers news of the day’s events as he holds a traditional cup of ka (hot coco) or do (a syrup of fermented corn).

From June to September of this year, the process of this tradition was recorded by Luis Porras, who also provided all the instrumentation for this new, Kugwe Kira CD., which means “Ancestral Histories”. The disc is a compilation of six traditional songs, written by Unchi. Their themes are inspired by such diverse topics as a drop of Ngabe blood and its path through generations, a song about monkeys, and a song about seagulls and their eating habits and flight patterns. Three of the songs are repeated strictly instrumentally at the end of the CD, signifying a ritual of dance at the end of Ngabe ceremonies. The result is almost hypnotic, a passing of the ages from pre-Colombian times. The CD extends over forty-five minutes, three quarters of an hour of authentic Costa Rican folklore.

Kugwe Kira is available in Tamarindo, Quepos and Tilaran exclusively at Jaime Peligro the Jaime Peligro bookstores, where they will gladly sample the music for their customers. A portion of the proceeds are donated to the preservation at Guaymi. All comments concerning this article are welcome.
Posted by Jimmy Danger at 10:03 AM No comments: